From TrainSpottingWorld, for Rail fans everywhere
Jump to:navigation, search
This article is about the Italian train service. For high-speed trains between London and Brussels / Paris, see Eurostar. For other meanings, see Eurostar (disambiguation).

Eurostar Italia is a network of Italian inter-city trains, operated by Trenitalia (a major Italian railway company) on the routes connecting the main Italian cities and towns. Several types of high-speed trains belonging to two major families carry out the service. Trenitalia states that there are 130 train journeys per day[1].

The first type is the "Pendolino"; this is an EMU (Electric Multiple Unit) built by FIAT Ferroviaria (now Alstom). The first ETR 450 entered service in May 1988 and various versions are now in service such as ETR 460 and ETR 480. All of these trains are capable of speeds up to 250 km/h and are provided with tilting systems that allow fast speeds on old tracks. These Pendolinos are blocked composition trains used on medium traffic routes; they carry up to 480 passengers. 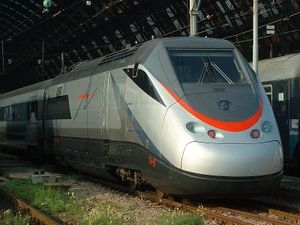 For the main routes Trenitalia uses the ETR 500 trains. These trains can carry 590 or more passengers and are capable of speeds up to 300km/h, although the service is presently limited to 250km/h because of the characteristics of the railway infrastructure. The ETR 500 is an 11-12 carriage train with double symmetrical traction units. This configuration allows the modification of the composition in response to varying service requests.

Currently, the only lines on which the trains travel at high speed are Florence - Rome - Naples and Novara - Turin. However, currently over 600km of new railway lines are under construction; these new lines will be usable at speeds up to 300km/h. These new lines will alleviate congestion on the existing lines and thus allow better schedules between the major cities. The lines under constructions are Milan - Venice and Milan - Bologna - Florence.

The name Eurostar is used under license from Iveco, which owns the trademark and used the name for one of their trucks. Despite the name similitude, there is no relation between this service and the Eurostar railway service running in the Channel Tunnel.

As of July 2006, the Eurostar Italia website state they operate the following routes in Italy: