The Mid Sodor Railway is a fictional narrow gauge railway on the Island of Sodor in The Railway Series of children's books by the Rev.W.Awdry and Christopher Awdry. The railway was closed in 1947, but three of its engines and several of its coaches survive on the Skarloey Railway. Part of its route is now occupied by the Arlesdale Railway.

The railway ran from the coast at Arlesburgh along the Arlesdale valley then through the Sudrian mountains to King 'Orry's Bridge near the town of Peel Godred. At Arlesburgh it met a branch of the standard gauge North Western or Fat Controller's Railway

The main sheds and works for the railway were at Arlesdale Green station.

The railway was at first a goods-only line for mineral traffic from the lead mines in the valley but with the arrival of tourists to Sodor it started carrying passengers, with connections at Arlesburgh for the ferries to the Isle of Man. The mountain section to Peel Godred was built to give the people of Peel a rail connection after plans for the Sodor & Mainland Railway to extend here were cancelled. Although the MSR's station was on the edge of the town it had once planned to build one in the town centre.

The MSR was responsible for the creation of the Culdee Fell Railway although there was no connecting station for the two lines.

The railway has so far only appeared in the book Duke the Lost Engine, but has been mentioned in others. 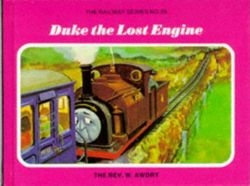 Duke hauling a passenger train on the MSR

Duke worked on the Mid Sodor Railway until its closure. He now works on the Skarloey Railway.

Stanley was engine number 2 on the Mid Sodor Railway, and originally came from America. He had a tendency to ride roughly on the rails. He was also arrogant and careless, believing that it didn't matter if he came off the track occasionally. However, this attitude resulted in his being converted into a pumping engine. He last worked at the Cas-ny-Hawin mine, where a breakdown resulted in the mine flooding and the closure of the railway.

He appeared in a single illustration in Duke the Lost Engine, as a pumping engine at the back of the engine shed. The engine is only known as 'No. 2' in that book; his name not being revealed by the Rev. Awdry until the publication of The Island of Sodor: Its People, History and Railways.

Stanley is based on a Baldwin Locomotive Works 4-6-0 World War I military engine sold after the war to the Welsh Highland Railway where it ran as No. 590. The engine was reputed to ride roughly and was broken up for scrap in 1942.

Stanley's role is taken by Smudger in the television series, but he appears to be more akin to Rheneas than a Baldwin.

Falcon was a young engine who paid more attention to the view than where he was going. On closure of the MSR, he was bought by the Skarloey Railway where he works, renamed, as "Sir Handel".

Falcon was based on Corris Railway No. 3, which now works on the Talyllyn Railway as "Sir Haydn".

Stuart too was saved by the Skarloey Railway, where he took the name Peter Sam. He is named after Kerr Stuart, the company that built him.

Stuart is also based on a Corris Railway locomotive, No.4, which was purchased by the Talyllyn Railway where he runs as "Edward Thomas".

The Ffestiniog Railway's influence is most obvious in the character of Duke, an engine based on the Ffestiniog locomotive Prince; some of the rolling stock is also Ffestiniog-inspired. Like the Ffestiniog, the MSR is designed as a narrow gauge main line. In the history of the MSR, Awdry mentions Ffestiniog engineer James Spooner's involvement.

Readers have also identified elements of the Welsh Highland Railway (the character Stanley), the Snailbeach District Railways (the engine shed) and Owd Ratty (the original 3 ft (914 mm) gauge Ravenglass & Eskdale Railway), among others, used by Gunvor & Peter Edwards the artists who illustrated Duke the Lost Engine.

Rev. W. Awdry owned a model railway based on the MSR which included engines called Tim, Jim, Jerry and Albert, as well as an unnamed engine working at the mines.