From TrainSpottingWorld, for Rail fans everywhere
Jump to:navigation, search
This article or section does not cite its references or sources.
Please help improve this article by introducing appropriate citations. (help, get involved!)
This article has been tagged since August 2006.
This page covers high speed trains in Great Britain. For high-speed trains around the world, see High-speed rail. 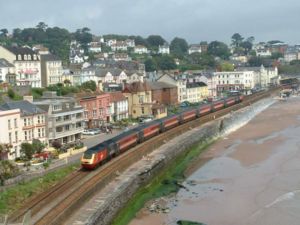 A Virgin Trains InterCity 125 running along the Dawlish sea-front.

There are three types of trains in Britain that have been traditionally viewed as high speed trains:

More recent 125mph trains that could be classed as high speed trains include:

A lot of money and resources were put into fundamental research into vehicle dynamics which, among other benefits, led to the development of the APT. This was designed to travel at high speeds around curves by tilting. Although the prototype was deemed successful and production units were built, they never entered regular service.

By this time, development was underway of another high speed train, which became the InterCity 125.

The origins of the InterCity 125 are steeped in irony, because it was planned as a stop-gap. Research had begun for the tilting Advanced Passenger Train (APT) but it was not possible to predict when it could enter service. The HST would apply what had been learned so far to traditional technology - a parallel project based on conventional principles but incorporating the newly discovered knowledge of wheel/rail interaction and suspension design. Although the APT never achieved all its design objectives the InterCity 125 was an outstanding success.

The InterCity 125 was introduced by British Rail between 1976 and 1982, when the maximum speed had been 100 mph (160 km/h). The increased speed and its rapid acceleration and deceleration slashed journey times around the country. The prototype class 252 (power cars 43000 and 43001) took the world record for diesel traction, achieving 143.2 mph (230 km/h) on 12 June 1973 on the East Coast Main Line between Northallerton and Thirsk. On 1 November 1987 the record was raised to 148.4 mph (238 km/h) by a shortened class 254 set running speed trials between Darlington and York. On 27 September 1985 a shortened class 254 set carrying passengers ran non-stop from Newcastle to London King's Cross, averaging 115.4 mph. It is likely that this record will be broken by a Eurostar once the full length of the CTRL opens in 2007. HST's were originally identified as Class 253 (seven trailer cars) used on the GWML and Class 254 (eight trailer cars) used on the ECML.

The InterCity 125 is still in use, and many people consider it to be the best train that Britain has manufactured in recent years - ironically the tilting trains it was supposed to complement and ultimately be replaced by only began to appear on British railways in the early 2000s.

The earliest replacement of InterCity 125s started with the introduction of the InterCity 225, between 1988 and 1991.

More recently, some InterCity 125s have been replaced or supplemented by:

The InterCity 125 is still in widespread use. First Great Western has supplemented (but not replaced) its InterCity 125s with 14 Class 180 Adelante trains, which can travel at the same speed. Because every carriage has an underfloor engine, they can accelerate approximately twice as quickly, which reduces journey times and allows for more frequent services. However, in-car noise levels are higher than in the InterCity 125 because of the underfloor engines, which, combined with less-comfortable seats and harsh interior lighting, has made them unpopular with passengers. They also proved to be unreliable, leading to a significant overhaul programme in 2004 to fix the major problems. They have now been replaced by more InterCity 125s, and have been cascaded into First Great Western Link services. From 2007 they will be leaving First Great Western for another TOC (probably Virgin Cross Country or Midland Mainline).

In 2004, First Great Western announced a major overhaul upgrade for its Class 43 locomotives (InterCity 125 power cars), including a new MTU engine. Two power cars are currently undergoing trials in service with the new engine. In 2005, it undertook a trial refurbishment of a pair of InterCity 125 coaches to bring them up to modern standards. Another coach has been refurbished with experimental aircraft-style seat-back screens. As part of its franchise commitments First Great Western has announced that it will be refurbishing the entire fleet and re-engining all power cars with the MTU engine [1]

In January 2006 the first batch of power cars were taken to Brush Traction to have MTU engines installed.

Twenty-six of First Great Western's InterCity 125 fleet are being refurbished into a high-density layout of mostly airline seats for services in the M4 corridor to Bristol and Cardiff. To improve acceleration on this route, where most station are 20 -25 minutes apart, the buffet cars will be removed. The remainder will be refurbished with new seating (leather in First Class) and at-seat power-points, and retain the buffet for the long-distance services to Swansea and the West Country.

GNER operate InterCity 125 sets between London King's Cross and the North of Scotland. Upon its taking over of the sets in 1996, the coaches were given an extensive interior refurbishment. GNER is committed to giving their InterCity 125 sets a further refit as part of its new franchise, to bring them to the same Mallard standard as their recently refurbished InterCity 225 fleet.

The Great Western power cars have had major modifications to their cooling system to prevent overheating on hot days. GNER's solution to the overheating problem was to haul sets under the wires using Class 91 electric Locomotives.

The proposed HST2 replacement is currently on hold. Siemens submitted an electro-diesel design based on their new Venturio model, but the Strategic Rail Authority has ordered a halt to any further progress, amidst much debate about the form a replacement should take. Work on developing the HST2, in the form of a Working Group, is now being progressed by the DfT.