The Advanced Passenger Train (APT) was an experimental tilting High Speed Train developed by British Rail during the 1970s and early 1980s, which did not enter regular service. 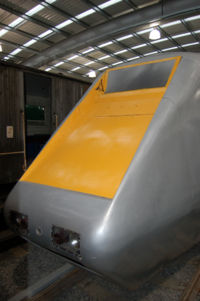 The introduction into service of the Advanced Passenger Train was to be a three-stage project. Phase 1, the development of an experimental APT (APT-E), was completed. Phase 2, the introduction of three prototype trains (APT-P) into revenue service on the Glasgow - London route, did occur but they were withdrawn after much bad publicity. Phase 3, the introduction of the Squadron fleet (APT-S), did not occur. Although the APT-S trains did not enter service, the experience gained enabled the construction of other high speed trains, including tilting ones.

In the mid 20th century, British Rail express services were being compared unfavourably, and perhaps unfairly, with France's TGV and Japan's Shinkansen. Experience with High Speed Trains on the East Coast Main Line from London to Edinburgh had shown that reduced journey times could produce a significant increase in passenger numbers, but that line was largely straight and suited to high speeds. Other lines, such as the West Coast Main Line from London to Glasgow, were not straight enough to support high speeds with conventional equipment. Lateral forces would be just too high around corners; passengers would not be able to stand upright easily, and items would move on tables. Because slower trains also use the same tracks, Superelevation (banking or "canting" of the track around curves) could be utilised to enable speeds up to only 125 mph. In order to permit a top speed of 150 mph (240 km/h), and thereby cut journey times, British Rail's engineers at the Derby Research Division developed an advanced active tilting technology, using hydraulic rams controlled by spirit level sensors to tilt the passenger cars into the curves so that no lateral forces would be felt. This was a very ambitious project and was led by a group of engineers, many of whom had an aeroengineering background. Not only was the train designed to tilt but it was also articulated and had hydrokinetic (Water turbine) brakes. The latter feature is often overlooked but was in fact just as significant as the tilting concept, because it enabled the train to stop within the existing signal spacings. The fact that under operating conditions it failed to do so, was one of the main factors in the train being withdrawn.

Some of the senior managers in British Rail at the time were unwilling to put all their eggs in one basket, and so initiated a parallel project to design a train based on conventional technology as a stopgap. This was the High Speed Train (HST), which was also marketed under the Inter City 125 name. The irony is that, while the APT must ultimately be considered a failure, the HST went on to become one of the most successful designs ever and is still in use 30 years later.

In 1972 the APT-E, a gas turbine-powered experimental testbed, was constructed. This was only four cars in length; two power cars, one at each end, and two 'passenger' cars full of instrumentation. The experimental train APT-E having proved the concept, British Rail moved to build three prototype Class 370 APT-P trains. Gas turbines had been chosen for their light weight compared to diesel engines, but Leyland had ceased production and development, and no other was suitable. Thus the new APT-P and APT-S trains were to be electrically powered, and so restricted to electrified track. 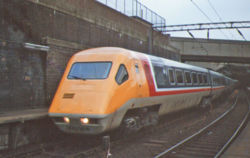 The APT-P trains were designed as two half-trains with twin power cars in the middle, sharing one pantograph. There was a passage through the power cars, but it was noisy, cramped and not normally permitted for passengers; therefore, each end of the train had to duplicate facilities. There were a number of reasons for this unfortunate design compromise. Two power cars were necessary to maintain the design speeds over the northern banks with 12 coaches. Normally these would be situated at the front and rear of the train (as with the HST and TGV etc), but due to the design of the overhead line a "wave" was set up in it by the front pantograph, thus causing problems for current collection from the rear unit. The obvious answer was an on-board 25kV link to the rear power car, but this was considered unfeasible at the time. The final option was to put both power cars at one end of the train, but, at the high speeds (and with the tilt feature), concerns were raised over excessive buckling forces when the train was being propelled.

Demise of the APT

Political and managerial pressure to show results led to the three APT-P trains being launched in 1981 when, in hindsight, it was not ready for service; many technical problems persisted and reliability was not high. Predictably, the train suffered highly visible problems. Two APT-Ps were intended to be available for service at any given time, with the third out of service for overhaul and maintenance. The APT was often jokingly referred to by passengers as the 'Accident Prone Train' because of this.

Members of the press riding the first demonstration train apparently reported high levels of motion sickness, and this caused much bad publicity; though it has been suggested by some that the 'motion sickness' suffered by the press may have had more to do with them over-indulging in BR's "liquid hospitality". None of the other passengers on this demonstration run, or subsequent runs, noticed the problem. It turned out that the tilting mechanism was, in effect, working too well. It was perfectly compensating for lateral forces around curves, which induced motion sickness, since the eyes could see turning but the body did not feel it; reducing the tilt by a few degrees so that the curves could be felt cured this.

The first "public" APT-P run on 7 December 1981, from Glasgow Central to London Euston, was successful. Even so, British Rail played safe by running a scheduled service out of Glasgow some 15 minutes later. However, some APT-P cars suffered tilt failures during the return trip out of London, and this was widely publicised by the media. The extremely cold weather also caused problems with the brakes freezing. The trains were withdrawn from revenue service four days later. This highly visible failure was eventually to prove terminal for the project.

The APT-P trains were quietly reintroduced into service in the summer of 1982, and ran regularly, the problems having been apparently corrected, but the political and managerial will to continue the project and build the projected APT-S production vehicles had evaporated.

One APT-P set was kept at Glasgow Shields Depot and found use once or twice as an "EMU" to take journalists from Glasgow Central to Anderston railway station and back, for the Scottish Exhibition and Conference Centre. A second APT-P was stored in a siding behind Crewe Works. The "Glasgow" APT-P and the third APT-P were scrapped very quietly without publicity.

Williams [1] notes that work continued on a new variant, the APT-U, and that the project was later retitled InterCity 225, perhaps to distance it from the bad publicity surrounding the APT-P. The Mark 4 coach design that was introduced as part of the new IC225 sets for the East Coast Main Line electrification is a direct descendant of the APT-U, and the coach was designed for the retrofitting of the tilt mechanism, although this was never implemented. The Class 91 locomotives that power the IC225s also take many features from the APT-P powercars, including body- rather than bogie-mounted traction motors to reduce unsprung load, and having the transformer below rather than on top of the underframe to reduce the centre of gravity. Unlike the APT-P powercars, though, they were never intended to tilt. 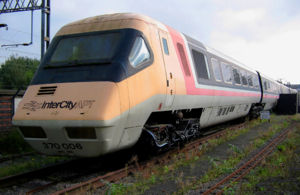 The APT-E unit is now owned by the National Railway Museum and is on main display at their Locomotion museum at Shildon in County Durham. Also at Locomotion is an APT-P power car, number 49006, which is due to undergo restoration work after having been stored outdoors at York for many years. Appropriately the second APT-P unit is now on display at The Railway Age at Crewe and can be seen from trains passing on the adjacent WCML.

APT versus TGV and Shinkansen

In contrast to the APT, France's high speed train, the TGV, developed around the same time, has been a great success. SNCF decided to develop not only a new train, but a new infrastructure for it to run upon as well. They built completely new Lignes à Grande Vitesse (high speed lines) with long, straight tracks designed for high-speed running, with longer signalling blocks lengths which relieved the problems of braking in adverse conditions, and avoiding the need for a complicated tilting system, as did the Japanese with their Shinkansen.

Doing this in Britain would have been more problematic, with public enquiries necessary, as shown with the initial difficulty in obtaining permission to build the more recent Channel Tunnel Rail Link (CTRL). In Britain's crowded island, the cost and upheaval would simply be prohibitive (and not politically acceptable, as it was in the even more crowded Japan), particularly as British Rail was looking for a solution, not only for the West Coast Main Line, but also for other routes such as the Western Region's services to Bristol, and the Midland Main Line to the Midlands and Yorkshire.

What is often not acknowledged is that the TGV was only a small part of France's total rail network, while, in Japan, the Shinkansen was conceived as a totally new system to replace an increasingly inadequate narrow-gauge service. There was a need to carry upwards of 120 million passengers per year, which meant that its financiers could safely predict a rapid return on investment.

A video examining some of the reasons why BR failed to run the APT, why it failed to enter regular passenger service, and what was learned from the project. (Length: ~7 min)

The initial research into vehicle dynamics was at the cutting edge in the 1960s. The knowledge obtained has passed into mainstream theory, such that it is taken for granted. An early benefit was that freight trains could be speeded up, such that hundreds of miles of relief track ('slow lines') could be dispensed with.

The APT-P was new throughout and, perhaps, should have remained a 'concept vehicle'. However, the APT powercar technology was imported almost wholesale, though without the tilt, into the design of the Class 91 locomotives.

While tilting trains had been in development in other countries for some years, and even seen service, so-called 'pendular tilt' had not been particularly satisfactory. The 'powered tilt' of the APT was sold to the similar Pendolino project being developed in Italy. Italian Pendolino systems incorporating original APT technology have since been sold internationally to various rail networks, including the British Class 390 Pendolino introduced on the West Coast Main Line from late 2003 onwards, culminating in September 2004 with the introduction of a full passenger timetable, with tilting enabled from Manchester and Birmingham to London Euston.

It is perhaps salutary to note that, although the APT failed, this was not primarily due to the system which, given enough time to iron out the inevitable technical problems of brand new technology, could have worked; instead it was due to management failures concerning the introduction of the APT Project.[2] Too much technology, lack of commitment and moved Goal Posts are also blamed.[3] It is interesting to note that, even 25 years later (on an upgraded infrastructure) the Class 390 Pendolinos cannot match the original trains scheduled timings. London to Glasgow by APT (1980/81 timetable) 4hrs 10min against Pendolino (2005/6 timetable) 4hrs 25min. Although recently (on a one off non-stop run for charity) a Pendolino completed the journey in 3hrs 55 mins[1]. Neither can the Pendolinos match the window area provided by the demonstrably superior APT, which had 19.0 m² of glass area against the 10.1 m² of the Pendolino.