Acela Express (often called simply Acela, leading to early confusion with the Acela Regional and Acela Commuter) is the name used by Amtrak for the high-speed tilting train service operating between Washington, D.C. and Boston via New York City and Philadelphia along the Northeast Corridor (NEC) in the Northeast United States. The tilting design allows the train to travel at higher speeds on the sharply curved NEC without disturbing passengers by lowering lateral G-forces. Acela Express trains are the only true high-speed trainsets in the United States. This has made the trains very popular, and by some reckoning, Amtrak has captured over half of the market share of travelers between Washington and New York.[1] Outside of stations, Acela runs at speeds between 75 mph (120 km/h) and 150 mph (241 km/h), depending on track conditions. On the average, however, it is significantly slower than most other high-speed trains elsewhere in the world (e.g., Shinkansen, Eurostar, ICE, TGV).

The Acela name was announced in 1999, and was originally intended as a rebranding of most of Amtrak's Northeast services, forming three levels - Acela Express, Acela Regional and Acela Commuter.[2] Due to confusion between the lower-speed Acela Regional trains and the Acela Express – as the name is (intentionally) evocative of acceleration – the Acela branding was removed from what is now the Regional service in 2003. Acela Commuter was rebranded Clocker (a previous name) for similar reasons, also in 2003.[3]

The need for speed

The dense population of the Northeastern United States makes the Northeast Corridor the most heavily-traveled portion of the American passenger rail system. Two-thirds of rail passengers in the United States live in New York City, also home to the nation's busiest rail passenger station, Penn Station. In order to compete with airliners, Amtrak needed to increase the speed of trains in the region. However, the former Shore Line, from New Haven to Boston, is burdened by sharp turns that prevented regular trains from achieving high speeds. There was little support for building an entirely new railway as had been done for France's TGV and Germany's ICE.

In October 1994, Amtrak requested bids from train manufacturers who could design railroad cars that could negotiate the crowded system at up to 150 miles per hour (241 km/h). A joint project set up by Bombardier (75%) and Alstom (25%) was selected for the project in March 1996. The tilting design was used to compensate for the track's curvature and ensure that passengers would remain comfortable at higher speeds than a conventional train could safely achieve on the same tracks.

High-speed service was originally expected in late 1999, but various problems appeared. The trainsets were four inches (about 10 cm) too wide to fully tilt, and as a result were unable to achieve the speeds originally intended. After a series of delays, the first Acela Express service began on December 11, 2000, a year behind schedule.[4]

With the completion of electrification between New Haven and Boston, all trains on the line have become faster; one can travel between Boston and New York in just over three and a half hours on Acela Express (an improvement of half an hour). New York to Washington runs take about two and a half hours. These schedules, as well as the relative convenience of rail as opposed to air travel, especially after September 11, 2001, have made the Acela Express more competitive with the Northeast air shuttles.

Operating speeds and limitations due to usage of existing infrastructure

High-speed rail is usually defined as traveling faster than 200 km/h, or about 125 mph. The highest speed attained by Acela Express is 150 mph (241 km/h) on two sections of track in Rhode Island and Massachusetts, which total 18 miles (29 km). There are also many miles of track, especially north of New Haven, that have been upgraded to 110 mph and 125 mph (177 km/h and 201 km/h). South of New York, Acela Express is limited to 135 mph (217 km/h) with many stretches of 125 mph (201 km/h). Although the track is straight enough to allow 150 mph (241 km/h) in several areas here, the overhead catenary support system was constructed during the Great Depression. As such, it does not have the constant-tension features of the new catenary east of New Haven, and it cannot support running speeds over 135 mph (217 km/h). The slowest section of the electrified NEC is the portion owned by Metro-North Railroad and the Connecticut Department of Transportation between New Haven and New Rochelle. Trains here are limited to only 90 mph (145 km/h) on a four-mile (6-km) stretch in New York State, and to 75 mph (121 km/h) between the New York state line and New Haven. Additionally, tilting is not allowed anywhere on Metro-North or ConnDOT property. At maximum tilt, the built-too-wide Acela Express trainset would pass other trains on parallel tracks only 10 inches (25 cm) away.

The scheduled transit time for the 5:00 a.m. departure from Washington, D.C. (the quickest stopping pattern) to Boston's South Station on Acela Express service is roughly 6 hours 36 minutes. Allowing for the fifteen minute scheduled layover in New York City, the average speed is 72 mph (116 km/h) for the 456 mi (734 km) trip. For the 225 mi (362 km) journey between Washington, D.C. and New York's Penn Station, the transit time is 2 hours 48 minutes, an average speed of 80 mph (129 km/h). 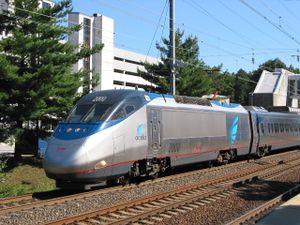 Although the design of the trains, with identical 6,000 horsepower (4,474 kW) power cars at each end, evokes France's TGV, the only components directly derived from the TGV are the 4 asynchronous AC traction electric motors (per power car). The tilting carriages are based upon Bombardier's earlier LRC trains rather than the TGV's articulated trailers, and the locomotives and passenger cars are much heavier than those of the TGV in order to meet North America's different approach to rail crash standards. The Tier II crash standards, adopted in 1999, have also resulted in the passenger cars being designed without steps and trapdoors, which means that the trainsets can only serve stations with high-level platforms — this restricts them to the Northeast Corridor and makes them impractical for most of the rest of the USA. Bombardier have since used the Acela Express's carriage design and a non-electric variant of the power car for their experimental JetTrain.

Due to the higher operating speeds and increased complexity of the high speed trainset (HST), Amtrak requires special additional training for its employees. In order for the employees to be allowed to work on the high speed trainsets they must first pass a work keys test, which does not test knowledge of railroad equipment but more general knowledge; there is no such test for conventional (low speed) train employees. If the employees pass the test then they are sent to school for intense training and testing.

In August 2002, shortly after their introduction, Acela Express trainsets were briefly removed from service when the brackets that connected truck (bogie) dampers (shocks) to the powerunit carbodies ("yaw dampers") were found to be cracking. The trains were returned to service when a program of frequent inspections was instituted. The damper brackets have since been redesigned and the old brackets replaced with the newer design.

On April 15, 2005, Acela Express trains were again removed from service when cracks were found in the disc brakes of most of the passenger coaches. The Bombardier-Alstom consortium replaced the discs under warranty. Limited service resumed in July 2005, as a portion of the fleet operated with new brake discs. Metroliner trains, which the Acela Express was intended to replace, filled in during the outage. Amtrak announced on September 21, 2005 that all 20 trainsets had been returned to full operation.

On January 14, 2007, a teenager, Robert Castro, a 10th-grader at the Easton High School, boarded the 12:55 pm MBTA from Providence, Rhode Island, to Boston South Station and got off at Mansfield at 1:20 pm, where Acela service killed him by running him over. Castro saw his mother on the opposite platform and instead of using the underpass, he tried to cross over the two Northeast Corridor tracks, where an Acela train struck him. He was hit by a train traveling at approximately 130 mph (209 km/h) and it took the Acela 1 mile to stop. He was pronounced dead on the evening of January 15.[citation needed]

Six days later, a northbound Acela struck and killed a pedestrian walking on the tracks near Middletown Avenue in New Haven. He has not yet been identified.[5]

Acela trains stop at the following stations. Stations served by all trains are in bold. For details on connections, and other trains which make more local stops, see Northeast Corridor. 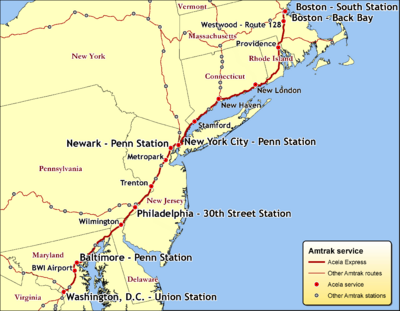