Tokyo Monorail (東京モノレール, Tōkyō Monorēru?) is a monorail system connecting Tokyo International Airport (Haneda) to Hamamatsucho Station in downtown Tokyo, Japan. The trains operate along an elevated line that follows the coast of Tokyo Bay. The trip from the airport to Hamamatsucho takes 21 minutes, and costs ¥470 each way. (An alternative to the monorail is the Keihin Kyuko Railway Airport Line between the airport and Shinagawa Station.) 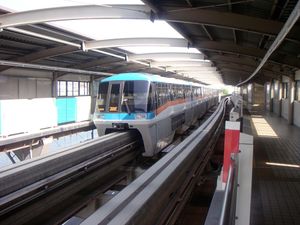 The line opened in 1964 to coincide with the 1964 Summer Olympics. The first cars were made in Japan from the German ALWEG design (also used in the Seattle and the original Disneyland Monorail), and were replaced by newer models in 1969, 1977, 1982, and 1989.

Originally, the monorail only served Hamamatsucho and the airport. The first station added in between was the Oi Race Track in 1965, followed by Seibijo in 1967. Currently, the line serves nine stations and handles about 300,000 passengers every weekday, operating from 5:30 AM to midnight with over 500 trains. A 1-station, 0.9-km extension to Haneda's new Terminal 2 opened on December 1, 2004; a possible extension to Shinbashi Station is being studied.

Often cited as the busiest and most profitable monorail line in the world (it carried its 1.5 billionth passenger on January 24, 2007[1]), it has recently become somewhat less popular through competition from the Keihin Kyuko Railway.

Japanese National Railways operated the monorail until 1981, when the line was privatized. Now operated by the Tokyo Monorail Co., Ltd. (東京モノレール株式会社, Tōkyō Monorēru Kabushiki-gaisha?), JR East purchased stock in the line in 2002, currently owning 70%; the remainder being divided between Hitachi, Ltd. (12%), Japan Airlines (9%) and All Nippon Airways (9%)

The six-car trains ("2000 Series") run at speeds of up to 80 km/h (50 mph), although, counting stops, they average around 45 km/h (30 mph). Each car has a combination of aisle-facing bench seats, forward and rear-facing seats, and seats in the center of the aisle. The trains also feature extra space for hand luggage, as a convenience for air travelers.

Tokyo Monorail is one of the only "private" railways to use JR East's Suica fare card system.

Currently, two types of services operate on the Tokyo Monorail:

When the timetable is amended on March 18, 2007, two new services will be introduced to replace the present Rapid train service:

Passengers using the monorail to travel to the airport can take advantage of Tokyo City Air Terminal facilities at Hamamatsucho. Japan's domestic airlines (JAL, ANA, Skymark Airlines, and Air Do) all have check-in counters and ticket machines right at the station. Tokyo Monorail tickets can also be purchased on the lower level of Kansai International Airport in Osaka, Itami Airport (also in Osaka), as well as Naha Airport in Okinawa and departure gate area at Hiroshima Airport.