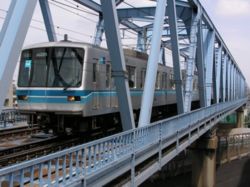 A Series-05 train on the Tozai Line. 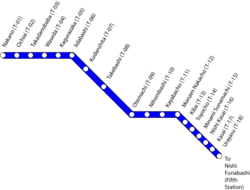 The Tokyo Metro Tozai Line (東京地下鉄東西線, Tōkyō Chikatetsu Tōzai-sen?) is a subway line. Part of the Tokyo Metro system, it connects Nakano Station in Nakano Ward, Tokyo, Japan and Nishi-funabashi Station in the city of Funabashi, Chiba Prefecture. On maps, its color is light blue; stations on the Tozai Line carry the letter T followed by a two-digit number.

The Tozai Line is the second most-ridden subway line in Japan (after the Midosuji Line in Osaka), and according to a 2005 study, is the country's most crowded during rush hours, when it operates at nearly twice its design capacity on average. Women-only cars, designed to prevent chikan, were introduced on the line during morning rush hours starting on November 20, 2006.

The Tozai Line was planned by a Ministry of Transportation review committee in 1962 and named Line 5. Its name literally means "East-West Line," and it was primarily planned to relieve traffic on the busy Sobu Main Line between Tokyo and Urayasu, as well as provide a straight crosstown connection through north-central Tokyo. Although this corridor is now served by the Toei Shinjuku Line and JR Keiyo Line as well, the Tozai Line continues to operate beyond capacity due to its convenience to other lines, as well as to growing condominium developments in eastern Tokyo.

The Takadanobaba-Kudanshita section of the line opened in 1964, and the remainder opened in stages until its completion in 1969. Through service with Japan National Railways began in 1969, connecting the local sections of the Chuo and Sobu lines.

The Toyo Rapid Railway, effectively an eastward extension of the Tozai Line, opened in 1996. 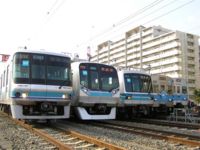 Master controller have deadman system (If driver separate master controller, brakes work). Partition of driver's cab and passenger room have 3 windows. On Tozai Line, usually 2 windows were closed by curtain but other is clear so passenger can look prospect even on subway.

Connection side of initial car on fukagawa factory.

Run from other rail way