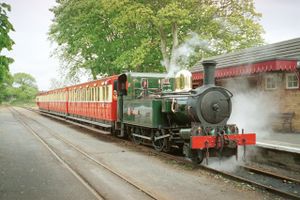 The Isle of Man Railway

The Isle of Man Railway (IOMR) is a steam-operated heritage railway connecting Douglas with Castletown and Port Erin on the Isle of Man. The line is built to 3 ft (914 mm) gauge and is 15.3 miles (24.6 km) long.

The line from Douglas to Port Erin is the last remaining part of the former 46-mile (74-km) system owned by the Isle of Man Railway Company, formed in 1870. Its first line, from Douglas to Peel, was opened on 1 July 1873, and was followed by the Port Erin line on 1 August 1874. Initially the Port Erin line had been planned to terminate at Castletown however the contruction of deep water docking facilities at Port Erin caused an extension to the line - a few years after completion, the dock was destroyed by heavy seas and the idea of deep water vessels abandoned there.

A third line was built in 1879 by a separate company, the Manx Northern Railway which ran from St. John's to Ramsey. It was taken over and operated as part of the Isle of Man Railway in 1904.

The whole system closed after the 1966 season but was briefly revived when the Marquess of Ailsa obtained a lease and reopened all three routes for a final time. Both the Peel and Ramsey lines shut following the end of the Ailsa lease in 1968 and the permanant way on these routes as well as the Foxdale line was lifted in 1974. For some years after, the Port Erin line operated only from its southwestern terminus to Castletown but finally service through to Douglas was again resumed.

The railway museum in Port Erin provides much history of the Manx railways.

From Douglas station the line climbs heavily for a few miles and then runs down heavy gradients towards Ballasalla, with interesting sea-cliff views to the east. After Ballasalla the line runs on relatively flat land. Travellers can see views of Bradda Head and Milner's Tower on the stretch from Castletown to Port Erin. Port Erin station has a cafe providing refreshments. The majority of the line runs through countryside, with only small stretches being close to built-up areas.

Many people start or end their journey in Port Erin, a Victorian sea-side resort, or in Castletown, the ancient capital of the Isle of Man.

In recent years the Manx government commissioned a study to see if it would be worthwhile to operate commuter services to help relieve the road traffic congestion in and around Douglas, the capital of the Isle of Man. The result of the study was a recommendation against such development. Nevertheless almost the entire line has been relaid in the first few years of this century. Additionally most of the numerous level crossings have been converted from manual to automatic operation.

No 1 "Sutherland" - Dismantled and in store at Douglas.

No 3 "Pender" - Sold 1978. Sectioned exhibit in the Museum of Science and Industry, Manchester.

No 5 "Mona" - Stored in Douglas carriage sheds. In need of major overhaul.

No 6 "Peveril" - On display at the Port Erin Museum after being restored by the Isle of Man Steam Railway Supporters Association.

No 9 "Douglas" - In store at Douglas. In need of major overhaul.

No 16 "Mannin" - On display at the Port Erin Museum after being restored by the Isle of Man Steam Railway Supporters Association.

No 19 (Ex County Donegal) Stored at Douglas after a stalled overhaul.

No 20 (Ex County Donegal) Stored at Douglas after a stalled overhaul.

There are currently 7 engines in operational condition and it is usual for 2-3 of these to be in steam at one time. In terms of rolling stock, there are around 11 coaches in service and with many more in store. An excellent stock book can be found at http://www.island-images.co.uk/Rail/Railstock/Zrailstock.html