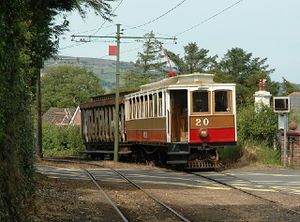 MER Car No.20 crosses the road into Baldrine station

The Manx Electric Railway is an electric interurban tramway connecting the towns of Douglas, Laxey and Ramsey on the Isle of Man. It connects with the Douglas Horse Tram at its southern terminus at Derby Castle in Douglas, and with the Snaefell Mountain Railway at Laxey station. The route of the tramway is one of scenic beauty and, for that reason, among others, many holiday visitors to the Isle of Man take an excursion on one of the trams.

The line is built to 3 ft (914 mm) gauge and is 17 miles (27.4 km) long. It is largely segregated from road traffic, running on roadside reservation or private right-of-way, and is electrified using overhead line at 500 volts direct current.

The line provides service throughout the year although the winter service is much less frequent than the summer service.

Originally the service was provided by about two dozen electric tramcars and the same number of trailers, the earliest of which date from 1893 and almost all of which predate 1910. Two of the original three cars that opened the line in 1893 are still in use, and are the oldest electric tramcars still at work on their original line anywhere in the world. The design of Manx tramcars predates any consensus on tramcar design, and as a consequence they have quite distinctive boxy bodies. Most services are operated by a motor car towing a single trailer.

The Manx Electric Railway is owned and operated by Isle of Man Transport, a department of the Isle of Man government. 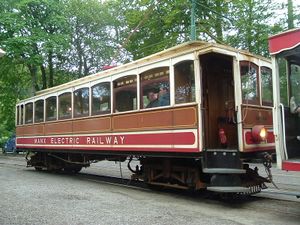 A train waits at Laxey station

The first section of the line, from Douglas to Groudle Glen, opened in 1893, the line reaching Laxey in 1894 and Ramsey in 1899. The first section of the line was built by the Douglas Bay Estates Ltd., and by 1894 the tramway had been acquired by the Douglas & Laxey Electric Tramway Co. Ltd. which changed its name to the Isle of Man Tramways & Electric Power Co. Ltd. (IoMT&EP) in the same year.