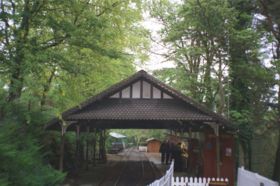 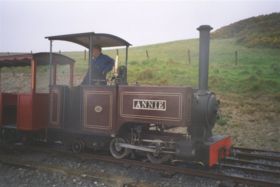 The Groudle Glen Railway is a narrow gauge railway, built in the late Victorian era in response to increasing demand for transportation down Groudle Glen brought on by the introduction of the Manx Electric Railway. The headland was developed, with a zoo being created and the railway being built. The 2ft gauge line ran from the upper part of the glen, Lhen Coan, to the Zoo at Sea Lion Rocks. The line opened on May 23 1896 and started with one engine, called 'Sea Lion', and three coaches. The engine was built by W.G. Bagnall Ltd. of Castle Engine Works, Stafford. The line became so popular that a further engine, Polar Bear, and additional coach stock was purchased.

Following the First World War, the two steam engines were replaced with battery-operated engines. However, these were only used for six years before being removed from service and replaced by the two original engines. The railway once again closed during the Second World War but was reopened afterwards. Only 'Polar Bear' was put into service and the line had sustained considerable damage owing to landslips. The engine eventually broke down and the line closed in 1962.

Over the following 12 years, the engines and line were sold off and broken up. 'Polar Bear' was restored and placed on exhibit at Amberley Chalk Pits Museum, West Sussex and the 'Sea Lion' was taken to Loughborough where it remained until 1987 when it was finally restored and returned to service on the restored line.

In 1982, the Isle of Man Steam Railway Supporters' Association launched a plan to restore the line and by May 1986 a section of the line reopened to the public. Over the following years the operational part of the line was restored to its original length and a further engine, 'Jack' was purchased and put into service.

The line is now maintained and operated by volunteers and runs popular services such as the 'Santa Trains' and various other events. It still takes the route to the old zoo at Sea Lion Rocks. Though the animals have long since gone, the remains of the zoo can still be seen to this day.