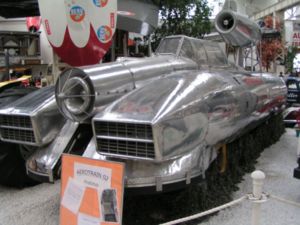 The Aérotrain was a hovercraft train developed in France from 1965 to 1977. The lead engineer was Jean Bertin.

This project was abandoned in 1977 due to lack of funding, the death of Jean Bertin and the adoption of TGV by the French government as its high-speed ground transport solution.

The aérotrain was abandoned by the French government in favour of TGV. A short comparison is given below.

It should be noted that aérotrain shares these advantages and disadvantages with the magnetic levitation train and thus may have been a competitor where maglev has been used.

In 1970, Rohr Industries decided to develop an aérotrain as part of a project by the Urban Mass Transit Administration to sponsor development of new mass transit technology to meet future transit requirements.

A test track was built in Pueblo, Colorado, where the prototype reached speeds of 145 mph (constrained by the length of track). Funding from UMTA ceased and the Rohr Industries Aérotrain was never commercialized.

In Britain a similar technology was developed under the name of tracked hovercraft or hovertrain, mainly by Eric Laithwaite However, this development effort did not get as far as the aérotrain technology. There was an attempt to build a test track but this failed due to civil engineering problems [1].