The American Locomotive Company, often shortened to ALCO or Alco (or less frequently ALCo), was a builder of railroad locomotives in the United States.

The company was created in 1901 from the merger of several smaller locomotive manufacturers:

The new company was headquartered in Schenectady and eventually closed all other locomotive manufacturing plants.

1904 saw the purchase of the Locomotive and Machine Company of Montreal, Canada; this company was eventually renamed the Montreal Locomotive Works (MLW) and continued to manufacture Alco designs after the parent company ceased production. The next year, 1905, Alco purchased Rogers Locomotive Works of Paterson, New Jersey, the second largest locomotive manufacturer in the US behind Baldwin Locomotive Works. 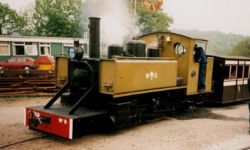 Alco was the second-largest steam locomotive builder in the United States, producing over 75,000 locomotives. Among these were a large number of well-known locomotives. Railroads that favored Alco products included the Delaware and Hudson Railroad, the New York Central Railroad, the Union Pacific and the Southern Pacific. Alco was known for its steam locomotives of which the 4-6-4 Hudson and the 4-8-4 Niagara built for the New York Central and the 4-6-6-4 (Challenger) built for the Union Pacific Railroad were fine examples. Alco built many of the biggest locomotives ever constructed, including Union Pacific's Big Boy (4-8-8-4).

Alco also built the first steam locomotive in North America to use roller bearings: Timken 1111, a 4-8-4 commissioned in 1930 by Timken Roller Bearing Company was used for 100,000 miles (161,000 km) on fifteen major United States railroads before it was purchased in 1933 by Northern Pacific Railroad.

Though the dual-service 4-8-4 steam locomotive had shown great promise, 1948 saw the last steam locomotives erected in Schenectady. These were the 9400-series Pittsburgh and Lake Erie Railroad 2-8-4 "Berkshires".

The company diversified into the automobile business in 1906, producing French Berliet designs under license. Two years later, the Berliet license was abandoned, and the company began to produce its own designs instead. Alco cars won the Vanderbilt Cup in both 1909 and 1910 and also competed in the Indianapolis 500-Mile Race in 1911, but they had less success in sales, abandoning automobile manufacture in 1913. The Alco automobile story is chiefly notable for starting the automobile career of Walter P. Chrysler, the plant manager, who left for Buick in 1911 and subsequently founded the Chrysler automobile giant.

Although it was strongly committed to the steam locomotive, Alco produced the first commercially successful diesel-electric locomotive in 1924 in a consortium with General Electric (electrical equipment) and Ingersoll-Rand (diesel engine). This locomotive was sold to the Central Railroad of New Jersey, and subsequent locomotives were built for a number of railroads including the Long Island Rail Road and the Chicago and North Western Railway. 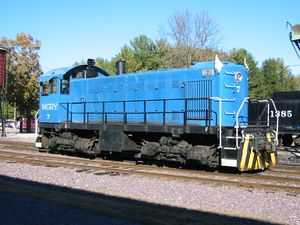 An Alco S-1 diesel switcher on the job at the MidContinent Railway Museum, North Freedom, WI.

The company bought an engine manufacturer, McIntosh & Seymour Diesel Engine Company, in 1929 and henceforth produced its own diesel engines, although electrical equipment was always from GE. Alco was in the 1930s the pre-eminent diesel locomotive builder in the United States, but the General Motors Electro-Motive Division took over that position with aggressive marketing, a ready supply of development capital from its parent company, and the intervention of the war years, when Alco was allocated the construction of diesel switching locomotives and its proven steam designs, whereas EMD was allocated the construction of mainline or road diesels. This gave EMD a lead that could not be overcome. Also a factor was that Alco's diesel locomotives were competing with its own steam locomotive products, while EMD had no such overlap. In 1940, Alco and GE entered into a partnership to build diesels under the name Alco-GE, an arrangement that lasted until 1953.

By 1948, Alco possessed 40% of the diesel locomotive market. PA and FA-type road units, as well as the ubiquitous S series (660 and 1000 horsepower) switchers and RS series (1000, 1500, and 1600 horsepower) road switchers represented Alco well in those years of motive power transition. Much of their success in this period can be tied to their pioneering RS locomotives, representing the first modern road-switcher, a configuration which has long outlasted Alco. General Electric was represented in the electrical gear of every locomotive produced by Alco. The complete conversion to diesels, unfortunately, did not mean that Alco was to maintain this production standing.

Nevertheless, the company held the number two position in the market until General Electric, dissatisfied with the results of its partnership with Alco, entered the domestic road diesel locomotive market itself in 1956. GE quickly took the number two position from Alco, and eventually eclipsed GM-EMD in overall production. Despite continual innovation in its designs (the first AC-DC transmission among others), Alco gradually succumbed to its competition, in which its former ally, General Electric, was becoming an important element. A new line of "Century" locomotives including the C628 (the first AC-DC transmission), the C430 and the C636, the first 3600 horsepower (2.7 MW) locomotive, failed to keep the enterprise going. Third place in the market proved to be an impossible position; Alco products had neither the market position or reputation for reliability of GM-EMD's products nor the financing muscle and customer support of GE, and profits were not forthcoming. Alco gradually ceased locomotive production, closing its Schenectady locomotive plant in 1969, and sold its designs to the Montreal Locomotive Works in Canada.

Although its fling with automobiles was ultimately unsuccessful, Alco diversified into other areas with greater success. During the Second World War Alco built munitions for the war effort, in addition to locomotive production; this continued throughout the Korean War. After the Korean War, Alco entered the oil production equipment and nuclear powerplant markets, the latter also starting the company's involvement in the heat exchanger business.

1955 saw the company renamed to Alco Products, Inc. because locomotives were no longer its predominant product.

The company was purchased in 1964 by the Worthington Corporation, which merged with the Studebaker corporation in 1967 to form Studebaker-Worthington, Inc. (SWI), Alco remaining a wholly owned subsidiary. Former divisions of Alco became semi-independent subsidiaries in 1968.

After the termination of locomotive production in 1969, the locomotive designs (but not the engine development rights) were sold to the Montreal Locomotive Works, who continued their manufacture. The diesel engine business was sold to White Motor Corporation in 1970, who formed them into White Industrial Power. In 1977 White Industrial Power was sold to the British The General Electric Company plc (GEC) who renamed the unit Alco Power, Inc. The business was subsequently sold to the Fairbanks-Morse corporation, who continue to manufacture Alco-designed engines in addition to their own design.

The heat exchanger business continued as Alco Products, Inc., passing through a number of owners. This portion of the business still survives under that name and is now owned by NITRAM Energy.

It is ironic how a manufacturer that lost market share and solvency because of its poor reputation for reliability still has its locomotives, both steam and diesel, in service more than half a century later. Alco locomotives still put in a day's work on many regional and tourist railroads across the United States. One bastion for the Alco locomotive today is the Delaware-Lackawanna Railroad in Scranton, Pennsylvania. In 2006, both rebuilding and operation of 50-year-old Alco diesel locomotives up and down the Pocono Mountains of Northeastern Pennsylvania occurs there on a daily basis.

Some ALCOs also still survive on Australian networks and in Pakistan