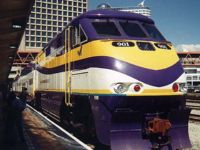 The Electro-Motive Diesels F59PHI diesel-electric locomotive is a common locomotive on passenger trains in North America, built by General Motors Electro-Motive Division. It is the most common passenger locomotive present on the Surf Line rail corridor in Southern California, where it is used to pull Metrolink and Coaster commuter trains, s well as Amtrak's Pacific Surfliner. In the Pacific Northwest, it is used to pull Cascades trains. It is also used by Amtrak California on the Capitol Corridor and San Joaquin trains, and it is also used for commuter operations in Seattle (Sounder), Dallas-Fort Worth (Trinity Railway Express), North Carolina (Piedmont), Vancouver (West Coast Express), and Montréal (AMT).

The locomotive is a 3000 horsepower (2.2 MW) B-B diesel-electric locomotive intended for service on North American mainlines, first built in 1993. This locomotive is equipped with a turbocharged 710E3 12 cylinder, 2 stroke water cooled "Vee" diesel engine (prime mover) that develops 3000 horsepower (2.2 MW) at maximum rpm. The main (traction) alternator converts mechanical energy from the prime mover into electrical energy that is distributed through a high voltage cabinet and rectifier to direct current traction motors. Each of the four traction motors is directly geared to a pair of driving wheels. The gear ratio of the traction motors to wheel axle determines the maximum operating speed of the locomotive; a standard F59PHI has a gear ratio of 56:21 which provides a top speed of 110 mph (176 km/h).

The F59PHI has a fully enclosed carbody which provides protected walkways for easy access to the engine room and trailing units. This arrangement allows routine maintenance while the locomotive is in service. The noteworthy aspect of this locomotive's exterior is the use of composites to present a streamlined appearance.

To supply electrical power for passenger service, the F59PHI is equipped with a secondary electrical generator referred to as the Head End Power (HEP) unit. The head-end generator generates AC power at 480 V AC 750 amps or about 500 kW to provide power to the passenger carriages for lighting, electric heating, and air conditioning. The head-end generator is powered by a second diesel engine dedicated to it. With this arrangement, the prime mover is not burdened by head-end power generation and consequently is used solely for supplying tractive effort.

Examples of the F59PHI are currently operated by these companies: