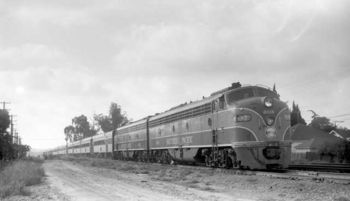 "Drumhead" logos such as these often adorned the ends of observation cars on the Coast Daylight.

The Coast Daylight was a passenger train originally run by the Southern Pacific Railroad (SP) between the cities of Los Angeles and San Francisco, California, via SP's Coast Line. In the eyes of many, the "most beautiful passenger train in the world" featured a stunning red, orange, and black color scheme.[1] The Coast Daylight had its inaugural run on March 1 1937 and was hauled by GS-2 steam locomotives. It was the first one of the Daylight series of the Southern Pacific passenger trains that also included the San Joaquin Daylight, the Shasta Daylight, the Sacramento Daylight, and the Sunset Limited. The Coast Daylight ran behind steam from March 1937 until it was dieselized on January 7 1955. After dieselization, the train continued to run until 1971, when Amtrak took over service and rerouted their Coast Daylight to Oakland. A second train known as the Noon Daylight ran on the same route between 1940 and 1949, with a suspension during World War II. In 1949, the Noon Daylight was replaced by an overnight train known as the Starlight using the same equipment. In 1956, coaches from the Starlight were added to the all-Pullman Lark and the Starlight was discontinued in 1957. Amtrak revived the train name for its Los Angeles to Seattle service known as the Coast Starlight.

*Note: 20 cars was the maximum consist, if demand was there.

On August 26, 1999: The United States Postal Service issued 33-cent All Aboard! 20th Century American Trains commemorative stamps featuring five celebrated American passenger trains from the 1930s and 1940s. One of the five stamps featured an image of a GS-4 steam locomotive pulling the red-and-orange train along California's Pacific Coast.

Locomotives used on the Coast Daylight

There are only two surviving locomotives that were used on the Coast Daylight. They are Southern Pacific 4449, a GS-4 steam locomotive which also served as the Bicentennial American Freedom Train engine from 1975 to 1976, and Southern Pacific 6051, an EMD E9 diesel locomotive.