For the city itself, see New Orleans, Louisiana.
For the song, see City of New Orleans (song). 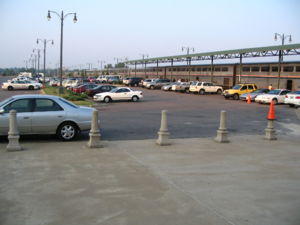 Amtrak's City of New Orleans stops at the Memphis, Tennessee station in 2005.

The City of New Orleans is a 926-mile (1490-km) nightly passenger train operated by Amtrak between Chicago, Illinois and New Orleans, Louisiana. Before Amtrak's formation in 1971, the train was operated by the Illinois Central Railroad along the same route (though changes have been made since then). The trip is currently scheduled to be completed in 19½ hours. The line within Illinois is also served by a daily morning train, the Saluki, and a daily afternoon train, the Illini. 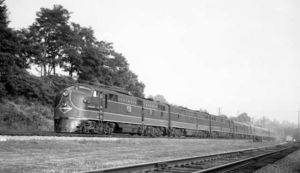 Powered by a trio of EMD E7 locomotives, Illinois Central train No. 2, the City of New Orleans, speeds through Wickliffe, Kentucky on June 24, 1951.

"Drumhead" logos such as this often adorned the end of the observation car on the Illinois Central's City of New Orleans.

The City of New Orleans began life as the daytime companion train to the all-Pullman car Panama Limited that also traveled the IC's mailine from New Orleans, Louisiana to Chicago, Illinois. The daytime train was significantly cheaper. This train was a major part of the large migration of African Americans from the U.S. South during the early 20th century, as it was one of the cheaper transportation options available.

On March 15, 1999 the City of New Orleans collided with a flat-bed semi-trailer near Bourbonnais. Of the 217 people aboard the train, eleven people were killed in the Bourbonnais train accident. The fourth car, where the fatalities occurred, was engulfed in flames following the collision at the crossing.

On April 6, 2004 the City of New Orleans derailed near Flora, Mississippi, approximately 15 miles north of Jackson, while enroute to Chicago. The train was traveling at 78 miles per hour when it derailed, and resulted in one fatality, Clara Downs, of Chicago, 3 serious injuries, and 43 minor injuries. A subsequent National Transportation Safety Board investigation determined that deterioration of the track due to poor maintenance caused the accident http://rrpicturearchives.net/locThumbs.aspx?id=77221.

Because of damage to the states of Mississippi and Louisiana due to Hurricane Katrina, Amtrak was forced in late August 2005 to cancel service south of Memphis, Tennessee. Service was first restored as far south as Hammond, Louisiana, and on October 8, 2005, Amtrak resumed service to New Orleans.[1]

The tracks used were once part of the Illinois Central Railroad system, and are now owned by the CN. The following lines are used:

Now the City Of New Orleans has the honor of having the best on-time performance in the entire Amtrak System at 93% and a good part of the time the train is up to 45 minutes early.[citation needed] 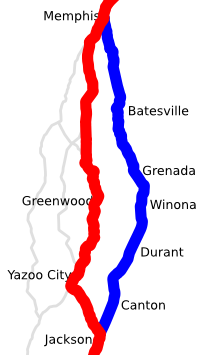 In 1995 the City of New Orleans shifted from the Grenada District (blue) to the Yazoo District (red) in northern Mississippi.

The City of New Orleans runs daily, northbound as train #58 and southbound as #59. It runs overnight, making the following station stops from north to south:

"City of New Orleans" is a folk music song written and first performed by Steve Goodman and subsequently recorded by Arlo Guthrie and many other artists, notably Johnny Cash, John Denver (with slightly different lyrics) and Willie Nelson. The song lyrics trace the trail of the train route (above) in celebrating the "...disappearin' railroad blues...."