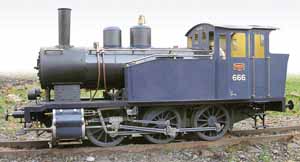 A handcrafted, 1:8 live steam scale model of a Finnish Vr1 type 0-6-0 tank locomotive from 1914 with outside cylinders.

In the Whyte notation for the wheel arrangement of locomotives (primarily steam locomotives), an 0-6-0 is a locomotive with six powered driving wheels (thus three powered axles), and neither leading nor trailing wheels.

In the UIC classification popular in Europe, the same arrangement is written as C (if the wheels are coupled with rods or gears) or Co (if they are independently driven).

The 0-6-0 was generally considered a switcher (UK: shunter) type, since its lack of guiding axles meant that it wasn't too stable at speed, yet its lack of unpowered axles meant that all weight was adhesive weight and thus tractive effort and factor of adhesion were maximised. The 0-6-0 became possibly the most common wheel arrangement for switchers worldwide; the 0-4-0 proved to be too small and not powerful enough for most applications, while the 0-6-0 proved to be 'just right'. 0-8-0 and larger switchers were popular, but many smaller and lighter railways could not use them.

The type could also be used for longer runs when high speeds were not required nor greater hauling ability than the 0-6-0 could provide. Branch line work and lighter freight runs were well within an 0-6-0's capabilities.

In the United States, huge numbers of 0-6-0 switchers were produced. The USRA 0-6-0 was the smallest of the USRA Standard classes designed and produced during the brief Government control of the railroads through the USRA during World War I. 255 of them were built and ended up in the hands of about two dozen US railroads; in addition, many of them (and others) built numerous copies after the war. The Pennsylvania Railroad rostered over 1,200 0-6-0 types over the years, which were classed as type B on that system. US 0-6-0s were generally tender locomotives.

In the United Kingdom, 0-6-0 tank locomotives were the most common locomotive type on all railways throughout the twentieth century. They were used whenever high speeds were not required and an 0-6-0 was 'big enough' for the task, including much branch line work, shunting tasks, and (often as tender locomotives) light to medium weight slower freight trains. All of the Big Four companies to emerge from Grouping in the 1920s used them in large numbers, and the Great Western Railway had an especial liking for the type, especially in pannier tank form, a type they produced until Nationalisation in 1948. Thomas the Tank Engine is based on this type. When diesel shunters began to be introduced, the 0-6-0 type became the most common also; many of the British Railways shunter types were 0-6-0s, including Class 03, the standard 'light' shunter, and Class 08 and Class 09, the standard heavier shunters.

Continental Europe railways also used 0-6-0s, though possibly not in the proportions used in England; they were generally reserved for light switching requirements, station pilots and the like, and on very small branch lines. Larger tank engines were used for most branch line service.

The first 0-6-0 with inside cylinders was built for the Leicester and Swannington Railway in 1834. Although inside cylinders were more difficult to build and maintain, and, in the early days, prone to breakage of the crank axles, the engines were more stable than their outside cylindered counterparts. The design was so successful that it was the basic pattern for many goods engines over the next hundred years. The cramped space between the wheels was a factor in the choice of a wider gauge in some railways overseas.