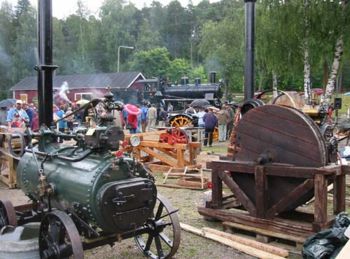 A live steam festival (often called a live steam "meet" in the USA) is a gathering of people interested in steam technology. Locomotives, trains, steam rollers and tractors, steam boats and stationary steam engines may be on display, both full-sized and in miniature. Rides may also be offered. 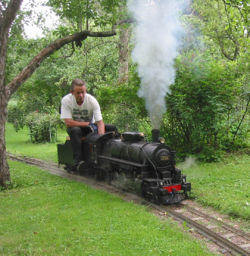 The term live steam also refers to a model steam locomotive, or any other steam-operated model that is powered by steam produced by boiling water. Steam rollers and traction engines are popular, in 1:4 or 1:3 scale, as are stationary model steam engines, ranging from pocket-size to 1:2 scale.

Ridable, large scale live steam railroading on a backyard railroad is probably the most popular aspect of the live steam hobby, but it time-consuming to build a locomotive from scratch and it can be costly to purchase one already built. Garden railways, in smaller scales than can pull a "live" person or be ridden on, offer the excitement of real steam engines, and at lower cost and in less space, but do not provide the same thrill as riding behind one's own locomotive.

One of the most famous live steam railroads was Walt Disney's Carolwood Pacific Railroad, which inspired Disney to surround his planned Disneyland amusement park with a working, narrow gauge railroad.

There are now hundreds of "clubs" and perhaps thousands of private, backyard railroads. The world's largest live steam layout, with over 25 miles (40 km) of trackage is Train Mountain in Chiloquin, Oregon, USA. Another notable layout is the one operated by Los Angeles Live Steamers.

A live steam locomotive is often an exact, handcrafted scale model. The ridable track gauges range from 2-1/2" to 15", the most popular being in the 4-3/4" to 7-1/2" range. Gauges from 10" (254 mm) and up are called "Miniature Railways" (in the USA these are known as "Grand Scale Railroads"), and are used mostly in amusement park rides and commercial settings. 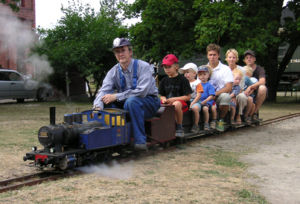 There are several common fuels used to boil water in live steam models, depending on their scale: 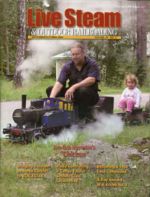 "Live Steam" is a U.S. magazine, founded in 1966 and devoted to the live steam hobby, as well as to other uses of miniature and full-size steam. Originally, it was a mimeographed newsletter, but soon expanded into magazine format. In 2005, the name was changed to Live Steam & Outdoor Railroading. It is currently published bi-monthly, in full color, with a press run of slightly over 10,000 (Dec. 2004).