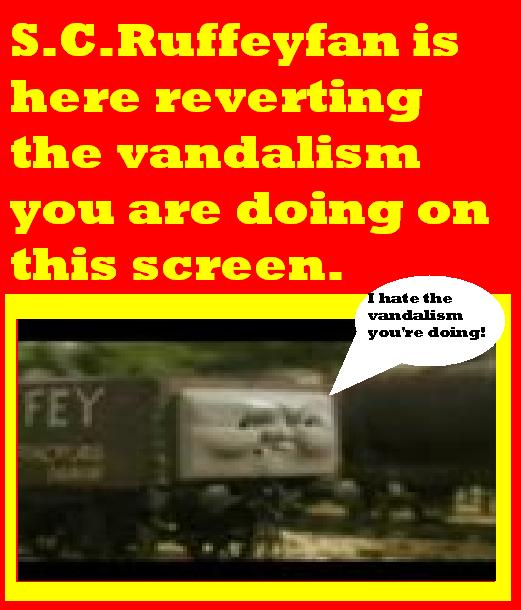 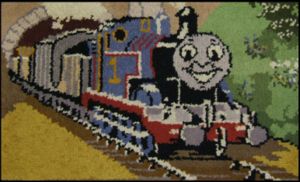 Oh, hi, I'm S.C.Ruffeyfan from Wikipedia. You can see my wiki account here: [1] I loved trains and Thomas ever since I was a baby and I will never grow out of it. I also like computers, McDonald's, Star Wars, Theodore Tugboat, TUGS, Shining Time Station and The Simpsons. I am currently building a OO-gauge model railway for my Thomas series The Thomas Adventures.

I would say: Dalek X, EdJogg, Bluegoblin7, Tim Trent and other users I can't remember. 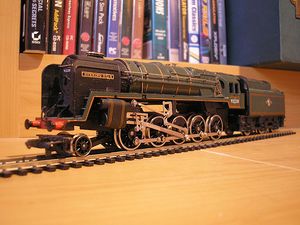 A Hornby model of a BR standard class 9F

I was born in London. I used to play the drums and I enjoy watching TV and getting model trains for my model railway. I have the Mallard, Flying Scotsman, BR Industrial 0-4-0 Tank Engine, Smokey Joe, Thomas(with Annie and Clarabel), Percy, D7101, Devious Diesel, Little Giant, Toby (with x3 open wagons) and Bachmann Spencer, Emily and some composite coach. I enjoy making movies on Windows Movie Maker and using Microsoft Paint. I have enjoyed making 'Death of Barney the Dinosaur' movies. Let the dino die!

I contribute to the Thomas articles, collect model trains, go on YouTube (no account there), watch TV, go on wiki and (against my will) go to school :-(

What I take part in

Ernest the Engine and Others

The Thomas Adventures is my own series about Thomas and his friends. A new character appears all the time and a few real things happen too. Every episode is 100 percent clean so there is no adult material at all. Episode Guide: Thomas Helps Out, A Hamburger Too Many, Fire at the Dock, LNER Gordon, Toby the Fortune Teller, The Trouble with Gordon, The Fat Man and his Cooking, Fallout(Season Finale)MOVIE:The Thomas Movie

Thomas Helps Out- When Toby runs into a log on the line, there's only one engine to help-Thomas!

A Hamburger too Many- A new McDonalds opens on Sodor, which leads The Fat Controller to eat, and you know the rest.

Fire at the Dock- A new tugboat comes to Sodor, and his name is George. When he is rude to the engines, Smokey Joe, Alex and Louis decide to start a fire...

LNER Gordon- Gordon is assigned to the LNER for a test run as he's getting old. While there, he has to conquer his fear of fast trains!

Toby the Fortune Teller- When Toby tells James it's going to rain and it does, the engines think he knows the future. It leads Toby to rage and let's say the engines get scrapped.

The Trouble with Gordon- Gordon has a washdown and it goes to his head. What will make him come to his senses? A crash, that's what!

The Fat Man and his Cooking- When The Fat Controller cooks for his boss, his boss says its the best meal ever, which makes him think he's on TV.

Fallout- When James and Thomas fallout on each other, it leads Percy to think Thomas is a bully, which makes Thomas unpopular.

Elemantary, My Dear Watson- A new engine called Watson arrives. When he takes the school route, he thinks the school is bad as kids are eating chips. What will happen?

First Day at the Quarry- Skarloey has his first day at the quarry, and doesn't know what to do, with his old age and makes up what to do as he goes along. Typical...

Madge's Big Moment- Madge thinks she's just a slow old granny and that no-one likes her, but when she's asked to participate in a Scammel lorry race, will Madge be able to win?

Peter Sam's Splash- Peter Sam is hypnotised by Watson to be a daredevil, which leads Peter Sam to start running late... because he makes a splash in Elephant Park.

A Midnight Mix Up- The Little Engines are all told to make a midnight run. Peter Sam and Sir Handel take the mail, Watson and Skarloey take cattle, Bertram and Smudger take a pipe organ to the church, Rusty and Duke take track maintenance while Rheneas and Duncan take The Thin Controller to a meeting. Then comes the mix-up...

MOVIE:The Narrow Gauge Engines Movie- Peter Sam makes a discovery on the narrow gauge railway; a lost city. There are preparations amde and the Thin Controller brings a new engine called Will to help. Peter Sam worries that Will will steal his spotlight, so plays a trick on him to make him look silly. The trick backfires, and Peter Sam runs away. Can the engines find him?

Alex Stuff is a series about all the stuff I make up. It features the situations I face in life. Characters are me, my brother Tom, my mum, my friends and everyone I know.Episode Guide: A day in the life of Alex, Elevator Boots, A Weirdo and the internet, Kid for sale, Lights, Camera, Action!(Season Finale)MOVIE: Alex Stuff Movie Thing.

Alex- An average 13 year old boy who believes in curses. He is a big weirdo and is nuts about the internet.

Ross- Friend of Alex. Likes football. Has a huge taste for adventure.

Callum- Another friend of Alex. Addicted to videogames. Pretty shy.

Tom- Annoying brother of Alex. Has a huge taste for sci-fi. SECRET AMBITION: To rule the world!

Ellie- Yet another friend of Alex. Highly skilled.

Louis- Alex's best friend ever. Both pull daring stunts and always on adventures with Alex.

A Day in the life of Alex- We watch Alex's average day. Caught on tape by Your kid stuff!

Elevator Boots- When Alex complains about being small, he decides on getting tall: the hard way!

A weirdo and the Internet- Alex and his friends have dreams that they become weirdos obsessed with the internet.

Lights, Camera, Action!- The kids decide to make a movie. With Alex as director, nothing will be good!

MOVIE: Alex Stuff Movie Thing- When Alex loses a baseball game for the school, he and Louis run away. This leads to a rescue led by Tom and all Alex's friends (with a few people Alex doesn't really like) to rescue the teenagers they know and uh, love. But when some evil man named Professor Bigbutt kidnaps the two, this leads to an escape led by Alex and several other men and women he's kidnapped. Will they escape? Find out on 14 August 2010! Sorry for the wait!

33 Productions is where The Thomas Adventures, Big Harbor Adventures, The Narrow Gauge Engines and Alex Stuff are made. It is founded by Letromickaday Hydeelo. Not really! I found it myself. Based in England.

Bob the Builder (Build a grave for yourself)

Ben 10 (Change yourself into a dead body)

Ernest the Engine and Others (Can't you move?!?!)

Well, everything said has been said, my friends. So, I have turned over to the Dark Side!!! LOL! If you want more ask me on my talk page. I'm there all the time. See ya! :>-)