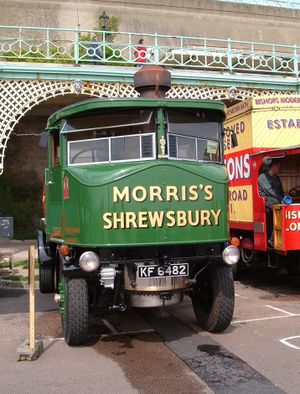 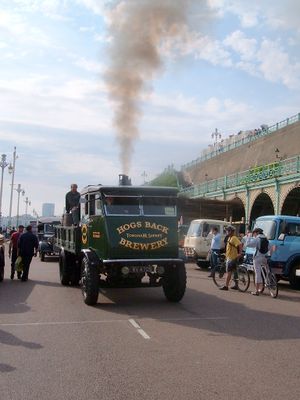 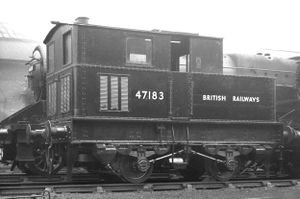 The company began life in 1906 as Alley & MacLellan based in Polmadie, Glasgow and changed its name to Sentinel Waggon Works Ltd when a new factory was opened at Shrewsbury in 1915. There were several other slight changes to the name over the company's lifetime when further infusions of working capital were required to obviate financial problems.

Alley & MacLellan began producing steam road vehicles in 1906 when they introduced a 5 ton vertical boiler wagon, which featured a 2 cylinder undertype engine and chain drive. The early wagon was so successful that it remained in production with relatively few updates until the launch of Sentinel's famous Super in 1923. The company also produced steam railway locomotives and railcars, for the LMS railway company and industrial customers.

Sentinel, along with Foden, dominated the steam market, but the 1930s saw the demise of both companies' ranges as new legislation forced the development of lighter lorries, Sentinel surviving the longest.

In 1934 Sentinel launched a new and advanced steamer - the S type which had a single-acting 4-cylinder underfloor engine with longitudinal crankshaft and an overhead worm-drive axle. It was lighter and featured a modernized driver's cab with a set-back boiler and was avilable in four, six and eight-wheel form, designated S4, S6 and S8. In spite of its sophisticated design, however, it could not compete with contemporary diesel trucks for all-round convenience and payload capacity, and was phased out in the late 1930s. It was not the end of Sentinel's involvement with steam, however, since the company built about 100 vehicles for export to Argentina as late as 1950.

In 1947 the company became Sentinel (Shrewsbury) Ltd, and had developed a new range of diesel lorries. Despite Sentinel's superbly engineered vehicles, sales diminished throughout the 1950s, and by 1956 the company was forced to cease lorry production. The factory was acquired by Rolls Royce for diesel engine production, and the remaining stock of parts and vehicles was taken over by Sentinel's chief dealer, North Cheshire Motors Ltd of Warrington, who formed a new company. Transport Vehicles (Warrington) Ltd in 1957 to produce Sentinel-based designs under the TVW name.

In 1963 Thomas Hill's decided to renew the loco agreement and relinquish the diesel vehicle agency, concentrating all efforts on the steam locomotive work.

Despite the various interesting developments, Rolls Royce did not consider railway locomotives to be part of their core business. They had agreed to complete all steam locos on order, and four steam receiver locos ordered by Dorman Long in 1956, but only after much consideration did Rolls royce finally agree at the end of 1957 to design and build a diesel locomotive of similar weight and power to the 200 hp steam loco that had sold so well. Thomas Hill's would assist in the design and development of these diesel machines and would be the Sole distributor.

In 1958 the last two Sentinel steam locos were delivered marking the end of an era. Two of the newly developed steam receiver locos were delivered and proved very satisfactory in service, but Dorman Long were not happy. There had been a change of heart among their engineers as well as a change of circumstances, and they were now favouring diesel locomotives. The last two steam receiver locos were built but never delivered and ultimately all four were converted to diesel hydraulic.

The prototype Sentinel diesel locomotive was built and ready to commence trials on the S & M Railway (Shropshire and Montgomeryshire Railway?) early in 1959. It met with the approval and enthusiasm of the Company's prospective customers and before the end of the year 17 locomotives had been sold and delivered. The company was ready to produce up to complete four locomotives a month.

Two locomotives, an 0-4-0 and an 0-6-0 were constantly employed on demonstration particularly in steel works. The Sentinels demonstrated their suitability for these heavy work. Heavier, and more powerful locos were called for, particularly by the steel industry and before the end of 1963 a 75 ton 0-8-0 powered by 2 x C8SFL engines and a 40 ton 0-4-0 fitted with a C8SFL engine had been added to the range.

A shaft drive 600 hp 0-6-0 machine was now being developed at Shrewsbury to use the new DV8T engine. Considerable interest in this loco was expressed by Stewart and Lloyds mineral division at Corby who were operating more than 20 steam locos, mainly of the Austerity type. This new locomotive Steelman was eventually delivered to Corby late 1967, about two years overdue. The prototype locomotive proved satisfactory and three further machines were ordered by Stewart and Lloyds plus one by Richard Thomas and Baldwins, Scunthorpe. With Stewart and Lloyds programme to replace more than 20 steam locos over the next few years the future for Steelman looked good.

Unfortunately for the Company and Rolls-Royce, British Railways, seeing a potential for their Swindon built class 14 Diesel hydraulic locomotives made Stewart and Lloyds an offer of 26 locomotives around three years old at a fraction of their original cost. This locomotive had proved rather a white elephant to B.R. but powered by a 650 hp Paxman, Voith Transmission, a rod coupled 0-6-0 capable of doing the work required, it was an offer which they could hardly refuse. New locomotive sales were declining anyway, and the release of such locos onto the industrial market at such prices was disastrous, and regrettably no further "Steelman" locos were built at Shrewsbury.

This was not to be the end of the Steelman. Some 12 years later ICI Billingham had a requirement for two heavy locomotives to replace their ageing Yorkshire Janus locomotives. Their stated wish was to buy the best and most up to date equipment available and in their efforts to achieve this aim, their engineers visited many industrial sites, and steelworks in particular. Their requirements were discussed with all UK locomotive manufacturers, and the final outcome of their investigations was an order placed to build an updated version of the "Sentinel Steelman locomotive". This order was subsequently increased to two machines which were delivered toward the end of 1981.

UK sales of Sentinel locos were now less than 10 per year, their only overseas success had been to licence the build of 36 0-6-0 locomotives for the railways in Portugal in 1965/6.

The locomotives and railcars (with a few exceptions) used the standard Steam Lorry boilers and engine units.

A special locomotive was produced at Sentinel, for Dorman Long and named "Princess". It consisted of 2 x 0-6-0 chassis coupled together to articulate. One unit carried the cab, a 5 drum oil fired Woolnough boiler and two 100 hp engines. The other unit housed the water and fuel tanks and also two more 100 hp engines providing a total of 400 hp. It was considered a magnificent machine by the staff but unfortunately was the only one of its kind ever built.

Another special was the Gyro Locomotive. Based on a 200 hp 4 wheeled 0-4-0 frame fitted with two "gyro units" (see Flywheel energy storage ) made by Oerlikon of Switzerland. The gyros were principally a 3 ton horizontal flywheel enclosed vessel filled with low pressure hydrogen. A vertically mounted electric motor/generator was directly coupled to the flywheel shaft. The motor took its power from an overhead supply via a type of pantograph arm raised or lowered by the driver. Power could only be taken whilst the loco was stationary. When the gyros had reached the required speed, the driver would lower the pantograph, switch the motor to generation and controlled the locomotive in a similar way to a diesel electric loco. Charging posts had to be strategically placed around the site.

This machine was specially built for the National Coal Board (NCB) at Seaton Delaval. It operated very satisfactorily but was eventually taken out of service because of site development and its restricted field of operation. In April 1965 it was converted for the NCB to a diesel hydraulic machine.

The Receiver Locomotives were another special type built just for Dorman Long and were based on the idea of a Fireless locomotive.