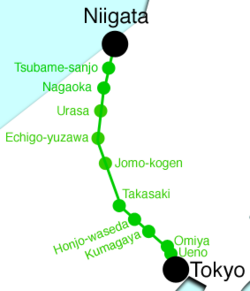 Jōetsu Shinkansen (上越 新幹線, Jōetsu Shinkansen?) is a high-speed railway line connecting Tokyo and Niigata, Japan, via the Tōhoku Shinkansen, operated by the East Japan Railway Company. It is one of the most complex lines in the Shinkansen network, as it has to cross the mountainous backbone of Honshū Island.

The program was initiated in 1971 by Niigata-born prime minister Tanaka Kakuei. Trial runs over the line began in November 1980, reaching a record 210 km/h in 1981. Regular service began on 1982-11-15. The line was initially planned to terminate at Shinjuku Station, but economic considerations pushed JNR to merge the line with the existing Tōhoku Shinkansen line at Ōmiya.

In September 1991, a 400 Series Shinkansen train set a speed record of 345 km/h on the Jōetsu Shinkansen line, and in December 1993, the STAR21 experimental train managed 425 km/h. The maximum speed for regular services on the line is currently 240 km/h.

term papers There is also a 1.8 km spur from Echigo-Yuzawa to Gala-Yuzawa Station(ガーラ湯沢), which is used in the winter months to bring passengers to a nearby ski resort.