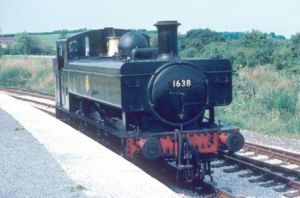 An 0-6-0PT, also known as an 0-6-0 Pannier Tank, is a type of steam locomotive built by the Great Western Railway with the water tanks carried on both sides of the boiler, in the manner of panniers. They were used for shunting duties, for branch line passenger and goods traffic and as banker engines on inclines.

Other examples of the type

On the Lappa Valley Railway Zededee is a narrow gauge pannier tank.