The museum holds in its collection 37 diesel locomotives, 10 passenger cars including several from the famous California Zephyr train, numerous freight and maintenance cars and 15 cabooses, as of 2006. They offer excursions and a "Run A Locomotive" program during the summer. The WPRM has the largest collection of Western Pacific equipment in the world and one of the larger collections of early diesel era locomotives and freight cars in North America. It is often considered to have one of the most complete collections from a single railroad. The WPRM is a "hands-on" museum that allows visitors to board and explore locomotives and cars in their collection. 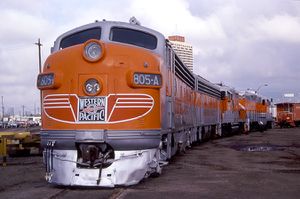 Western Pacific FP7 805-A from the Western Pacific Railroad Museum, on display in Sparks, NV in 2004. This locomotive once pulled the California Zephyr passenger train. Photo by Eugene Vicknair. Used by permission.

Among the significant pieces in the WPRM collection are Western Pacific 805-A, an FP7 model passenger locomotive that pulled the California Zephyr; WP 2001, the first GP20 model locomotive (an early turbocharged diesel); WP 501, an early switch engine and the first diesel purchased by the Western Pacific; Western Pacific 0-6-0 steam locomotive 165, a switch engine built by ALCO in 1919; WP 37, a 200 ton rail-mounted crane; and several rare and early 20th Century freight cars. Also located at the site are the Western Pacific Hospital, built in 1914 and one of the few preserved railroad hospitals, the Portola Diesel Shop built in 1953, and an interlocking tower from Oakland, California, currently stored unrebuilt. The WPRM prides itself on maintaining several of their road diesels in mainline operating condition and is well-known for making occasional movements on Class I railroads using their own historic motive power.

Lassen Volcanic National Park is nearby.

One of the most famous aspects of the Western Pacific Railroad Museum is its nationally known Run A Locomotive (RAL) program. Except for winter and certain weekends when special events are in progress, the museum provides visitors a chance to be an engineer for an hour. Participants are given on-the-ground instruction, then they get to operate a real locomotive of their choice for an hour. A qualified engineer joins them in the locomotive for oversight and further instruction.

This is one of the first programs of its type in the nation. More information can be found at Run A Locomotive.com. The program is so popular that it is often reserved months in advance.