Route map of the Tsuen Wan Line (Interchange stations are not denoted). 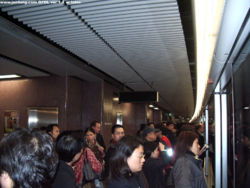 The Tsuen Wan Line (荃灣綫) is one of the seven lines of the metro network in Hong Kong's MTR. It is indicated in red on the MTR map.

The Tsuen Wan Line starts at Central station on Hong Kong Island and runs through western Kowloon to the southwestern New Territories, where it ends at Tsuen Wan station. It currently travels through 16 stations in 30 minutes along its route. Because it travels under Victoria Harbour from Central and into the busy areas on Nathan Road (Tsim Sha Tsui, Yau Ma Tei, and Mong Kok) continuing into densely populated Sham Shui Po, it is a very heavily travelled line.

The Tsuen Wan Line was one of the original lines of the Hong Kong Underground network, thus the initial plan was a bit different from the realised line, especially the names and the construction characteristics of the New Territories section. For example, there was a planned station further west of the present Tsuen Wan station terminus, named Tsuen Wan West located in a valley. The station is different from the current KCR West Rail Tsuen Wan station located under reclaimed land. Moreover, the line was supposed to run underground in Tsuen Wan, rather than the present line which was built on ground level. 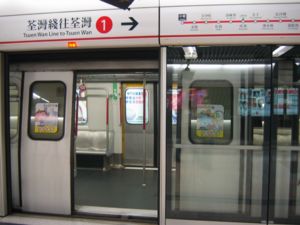 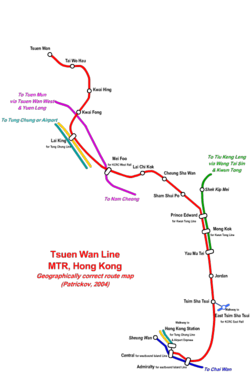 Construction to Tsuen Wan was approved in 1975 and commenced soon afterwards. While the main section of the line under Nathan Road in Kowloon started service in 1979, did not reach Tsuen Wan until 10 May, 1982. Curiously, all stations in the Sham Shui Po district (Sham Shui Po, Cheung Sha Wan, Lai Chi Kok and Mei Foo) opened a week later than the rest of the line. This was the only one rapid service in MTR, the journey time between Prince Edward and Lai King was shorter than "calling at all-station" for 2 to 3 minutes.

At least eight stations differ in names or location from the original plan. Central, Yau Ma Tei and Mong Kok stations were originally named after the streets crossing or above the stations, Chater Road, Waterloo Road, and Argyle Street respectively, but the name of each station was later changed to represent the district of the station. Moreover, Mong Kok station was planned a bit further north of the present station, which would have taken the place of Prince Edward station, and Sham Shui Po was planned a bit south of the present station.

Kwai Fong, Kwai Hing, Lai Chi Kok, and Cheung Sha Wan stations gained their present names before opening, and Mei Foo was also renamed from "Lai Chi Kok" to "Lai Wan" (荔灣). The other stations had their Chinese name changed when they opened, and were renamed in 1985 together with Mei Foo station.

Tsuen Wan Line is a line that runs from the south to the north. It is mostly underground, beginning at Central. It crosses the harbour after Admiralty to Tsim Sha Tsui. Then, the line first runs underneath Nathan Road (Tsim Sha Tsui to Prince Edward), then Cheung Sha Wan Road (Sham Shui Po to Lai Chi Kok), before emerging from the hills at Lai King Station.

This is a list of all the stations on the Tsuen Wan Line. The coloured boxes holding the station names represent the unique colour motif for the station.

1 Yau Ma Tei Station is presented as an interchange graphically, while public announcements in trains have never recommended passengers to change trains there. One probable reason is that Yau Ma Tei is the terminus of the Kwun Tong Line, and cross-platform interchange is not available as Mong Kok and Prince Edward stations are built with.