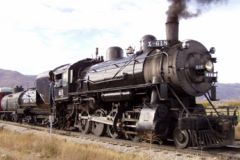 The Heber Valley Historic Railroad (HVRR), based in Heber, Utah, is a heritage railway dating from 1899. The line operates between Heber City and Vivian Park which is located in Provo Canyon.

The HVRR carries over 77,000 passengers a year.

It has two 1907 Baldwin Consolidation-type locomotives: Ex-Union Pacific No. 618 and Ex-Great Western No. 75. As of the date of this article, No. 75 is currently out of service for boiler rehabilitation.

The HVRR is also home for two EMD diesel-electric locomotives: Ex-Union Pacific EMD NW2 No. 1011 and Ex-USATC EMD MRS-1 No. 1813

The line operated by the HVRR was formerly part of a Denver & Rio Grande Western branch line that connected Heber City to Provo, Utah. The branch line was completed in 1899 and operated freight (and passenger) service until the line's abandonment in 1967.

The line was saved for tourist use and was reopened in 1970 when No. 618 and other equipment was brought up the line from Provo. The track between Provo and Bridal Veil Falls was later removed and converted into a recreational trail. During the 1970s and 1980s the railroad operated as the "Heber Creeper". In the late 1980s this railroad went out of business.

Citizens in the Heber area successfully petitioned the State of Utah to help save the railroad, thus creating the Heber Valley Historic Railroad Authority in the early 1990s. Since this time the railroad has seen considerable growth. The railroad operates as a non-profit 501(c)(3) organization.

The railroad line is approximately 16 miles long. A typical round trip ride on the train takes about 3 hours. There are a total of four passing sidings outside of the Heber yard limit. Notable landmarks seen from the train include: Mount Timpanogos, Cascade Mountain, Deer Creek Dam and Reservoir, Provo River, Sundance Ski Resort, Tate Barn, and Soldier Hollow. A variety of wildlife including deer, eagles, fox, moose, turkeys, hawks, mountain lions (cougars), and beavers, have all been seen from the train as well.

The railroad can be seen from various points along U.S. Highway 189 between Heber City and Vivian Park.