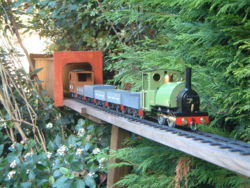 A garden railroad or garden railway is a model railway system set up outdoors in a garden. Most often, it is #1 gauge rail track with a G scale or similar train. LGB first popularised these trains, and more recently other manufacturers such as Aristo Craft Trains and USA Trains have produced models in this scale/gauge combination. Atlas O also makes weatherproof #0 gauge tracks for O scale, very suitable for smaller gardens and patios.

While G is the most popular scale for garden railroads, 16 mm scale has a dedicated and growing following especially in the UK. Model locomotives in this scale are often live steam scale models of British narrow gauge prototypes.

At its most basic level, it works just like an indoor railway, including turnouts and turntables. However, special considerations must be taken for everything from sunlight and water to dirt and leaves, and even wildlife. The distance covered also means that electrical resistance in and between sections is much higher, and electrical power will tend to drop off at the far end.

To eliminate this, some are rigged to use RC car parts such as rechargeable batteries. Others even use live steam and run as a real steam locomotive would. The steam can be generated from a variety of sources, ranging from messy solid pellet (i.e. methenamine) or sterno-type fuel, through clean-burning butane gas, to prototypical coal burners. Live steam is particularly widespread amongst 16mm scale garden railway enthusiasts.

Many also have digital audio on-board, so they sound like a real train. They can also use Digital Command Control or other similar systems, though dirty outdoor track can cause less of a problem with signal than with simple DC power. This is because DCC puts the full voltage on the rails at all times. There are many benefits of DCC when compared to DC analog systems.

Plants are usually an integral part of a garden railway, and dwarf varieties along with pruning are often used to keep them in proper proportion. Some go so far as to use bonsai techniques, however this can be very time-consuming for large areas.

Buildings are also often used in a garden railway, though they too must be constructed to withstand the weather. Train stations and freight depots are popular, some even building whole towns trackside. The loco shed is a common place to store a locomotive (or the whole train) when not in use.

Other geographic features are used, such as a small pond to represent a lake, rocks for boulders, or tunnels through "mountains" or under stairways. Tunnels can be a particular challenge, because everything from cats to raccoons and more like to hide in them, particularly to get out of the rain or heat, sometimes even to sleep, nest, or hibernate. A derailment inside a tunnel can also be permanent if careful planning is not done to ensure that it can be reached by access panels (trapdoors) or at arm's length from either end.

A frequent theme is the railway in an idealised urban or rural environment, so it is often found in the context of a model village. Some Garden Railways work opposite to the model village style and opt more for a railway in the garden, where the railways runs amongst normal plants, not in scale with the railway. These sort of railway designs allow for large scale planting and many gardeners have the railway as a secondary hobby to gardening.

File:DCP01777resize.jpg
Garden Railway in a Backyard

Because these layouts are often so unique, they are frequently given names by their owners, just like a real railroad. Some are very natural-sounding, as if they were real. Other names are playful or even silly.

Numerous garden rail societies have been formed around the world. Members often invite others over for social gatherings, as well as rotating club meetings around each month. A large setup is even on public display at the Atlanta Botanical Garden during the summer of 2005 (through early October), including replicas of downtown Atlanta skyscrapers made from wood, bark, and other natural materials.

A notable example in England is Bekonscot which is the oldest model village in the world and has an extensive railway running through a mythical 1930s England. This is well known to be one of the largest, and oldest, garden railways in the UK open to the public.

Backyard railroad — outdoor railways that are large enough to ride on and often cover many acres.