The S class was the final design of the VR Chief Mechanical Engineer Alfred E Smith, who had been responsible for the highly successful K class 2-8-0 and N class 2-8-2 designs and closely involved with the earlier A2 class 4-6-0, C class 2-8-0, and Dd class 4-6-0 designs.[1]

The S was VR's first three cylinder locomotive, and A E Smith's design was influenced by Nigel Gresley's GNR A1 class 4-6-2 with its Gresley-Holcroft derived motion. The S class also showed American design influence in its use of a delta trailing truck and bar frames rather than plate frames.[2] Another notable design innovation was the incorporation of all three cylinders and the smokebox saddle into a single casting.[3]

The S class spent its entire normal service life on the main North-eastern line, its axle load too high for regular service on any other VR lines. Although Annual Reports show the VR planned to upgrade the main Western line and build further S class locomotives to haul Overland services between Ararat and Serviceton, exigencies imposed by the Great Depression and World War II meant the planned upgrade of this service never eventuated.

S 300 hauled its first revenue passenger service between Seymour and Melbourne on 19th March 1928. After ten weeks of trials, it was regularly rostered on the key North-eastern line Sydney Limited and Albury Express services.

With the delivery of a further three locomotives during 1929-30, the S class displaced the earlier A2 class 4-6-0 locomotives from these services. Their superior power had a profound impact on the timetable, shaving half an hour from the previous five hour northbound Sydney Limited schedule set for the A2.[5]

Initial tests with prototype S 300 revealed only average performance for a locomotive of such size. Further detailed study revealed that insufficient valve travel and narrow port openings was impairing performance, and based on this study changes were made to the three S class locomotives that followed S 300.

During the mid 1930s, all four S class locomotives were equipped with VR's 'Modified Front End' for improved drafting and reduced cylinder back pressure. Smoke deflectors were fitted to compensate for the reduced uplift of smoke from the redesigned exhaust. Tests showed a horsepower increase from 1,560 hp (1,160 kW) to 1,920 hp (1,430 kW) at 30 mph (48 km/h) as a result of these changes.[6] During dynamometer car testing with S 301 in 1937, a maximum output of 2,300 drawbar horsepower at 45 mph (72 km/h) was recorded.[7]

The boilers were later modified to incorporate thermic siphons. However, unlike its close relative the X class Mikado, the S class was not modified with Belpaire fireboxes and retained its round-top boilers.

A final modification late in the life of the S class was the conversion to oil firing (from February 1951 onwards). 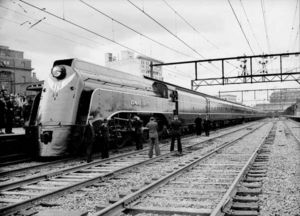 From 1937, the S class was assigned to haul the VR's glamour streamliner, the Spirit of Progress. At the time, they were the only passenger locomotives on the VR with enough power to take the Spirit's trailing load of up to 600 tons[8] unassisted over the 1 in 50 gradients between Melbourne and Albury. Their appearance was dramatically altered with the addition of streamlining and royal blue and gold livery designed to seamlessly match the train carriages. They were also equipped with enormous tenders with enough water and coal capacity to enable the train to travel the entire 191 mile journey non-stop at an average speed of 52 mph (83 km/h),[9] with a maximum permissable speed of 70 mph (112 km/h).

At this time, the locomotives were also named after prominent figures in early Victorian history:

On the initial demonstration run of the Spirit of Progress to Geelong, S 302 Edward Henty set an official Australian rail speed record of 79.5 mph (128 km/h). While in the context of the British locomotive Mallard reaching a recorded 126 mph (203 km/h) the following year this speed was hardly remarkable, it is nevertheless indicative of the strong performance of the S class that the record speed was achieved on level track by an eight year old locomotive hauling a trailing load of around 500 tons.

A minor change to the appearance of the streamlining was the removal of the locomotives' solid cowcatcher and replacement with an open type when it was discovered that the original design created a partial vacuum behind the cowcatcher, sucking dust and grime into the slide bars for the third (inside) cylinder and leading to maintenance problems.[10] 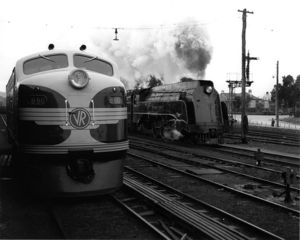 S 302 Edward Henty meets its nemesis at Seymour in July 1952 as B 60 completes its delivery run to Melbourne. (Victorian Railways publicity photograph)

The S class was the first victim of the Victorian Railways dieselisation program, which began in earnest with the delivery of B class mainline diesel electric locomotives in 1952. Because of the relatively high maintenance cost associated with their Gresley valve gear, very limited route availability due to their high axle load, and relatively high mileage, the S class locomotives were progressively withdrawn as mechanical condition dictated. First to go was S 301 Sir Thomas Mitchell in October 1953 with worn cylinders, and the rest of the class quickly followed. In September 1954 the last remaining example, S 300 Matthew Flinders, was scrapped. 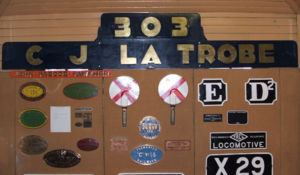 Despite their key place in Australian transport history, the S class locomotives were all scrapped before the preservation movement had gathered enough momentum to ensure at least one example was preserved. However, it could be argued that the loss of the S class helped to galvanise railway enthusiasts into lobbying for the preservation of other VR locomotives (beginning with the X class) and the establishment of the ARHS Railway Museum.[11]

The enormous tender tanks of the S class found a new use as tankers for weed-spraying of VR tracks, and the tender frames and bogies were also converted into heavy duty flat wagons.[12] One of the 2,000 gallon oil tanks retrieved from an S class tender was used in April 1954 to convert an R class 4-6-4, R 748, to oil firing.[13]

The names and numbers of the four S class steam locomotives were also carried over when the VR introduced a new class of mainline diesel electric locomotives introduced in 1957.[14]

An assortment of remnants such as the rusting hulks of giant tender tanks[15], some of the Spirit of Progress locomotive name and number plates, and at least one of the locomotives' whistles, are all that remains of the S class steam locomotives today.