From TrainSpottingWorld, for Rail fans everywhere
Jump to:navigation, search
This article is about the United Aircraft Corporation TurboTrain, a train used in Canada and the United States.
For the French Turbotrains, see Turbotrain. 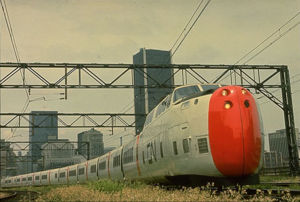 The Turbo is shown here in its original Canadian National livery southbound of Montréal in 1973 probably going to Toronto.

The UAC TurboTrain was an early high-speed train manufactured by United Aircraft Corporation that operated in Canada between 1968 and 1982 and in the United States between 1968 and 1976 (though they were not disposed of by Amtrak until 1980). It was one of the first turbine-electric locomotives (GTELs) to enter service for passenger traffic, and was also one of the first tilting trains to enter service.

The design had origins in studies done by the Chesapeake and Ohio Railway in the 1950s.[1] These early studies did not include turbine power, but included a number of innovative design features for high-speed passenger service, including guided-axle tilting suspension, power cars at both ends, and the clamshell nose doors for combining locomotives to form longer trains.

The tilting mechanism was based on the passenger cars being suspended at their ends from wishbone (A-frame) suspension arms. As the train rounded a corner, the cars would swing outward to level the car floor in relation to the apparent "down". TurboTrain cars are 2 ½ feet (75 cm) lower than conventional cars, to lower the center of gravity in relation to the swinging point at the top of the arms. The arms included air springs to smooth out the motion, although it still felt "odd" while the train navigated short turns in switchyards and stations.

The suspension arms for each neighboring pair of cars were attached to a common bogie between them, as opposed to having a pair separate bogies for each car. The bogies rode the common curve between the two cars, centered by traction springs that centered the axle between adjoining car bodies.[2] The Talgo has a similar system of articulated single-axle trucks, but it employs a Watt's Link mechanism for axle guidance. As the cars shared a single suspension, the train as a whole was basically a fixed length, requiring major work to add or remove passenger cars.

The patents were later implemented by United Aircraft to satisfy requirements of the Department of Transportation's Northeast Corridor Demonstration Project. Most of the original design survived, but UA added turbine power in place of the original diesel. The engines were a modified version of the famous Pratt & Whitney PT-6, built by UAC and known as the ST-6. The engine delivered 400 or 500 horsepower and drove an alternator though a hydraulic transmission system with gear reducers. A 3rd rail pickup assembly (a friction guide slipping on a third track) allowed the train to operate in the tunnels leading to Grand Central Station (and later Penn Station) in New York City with the engines turned off.

The engine was so much smaller and lighter (300 pounds (135 kg) with accessories) that the diesels that the locomotives ended up being relatively small in comparison to the passenger cars. This "extra space" was utilized by extending the locomotives out to be somewhat longer than the passenger cars, placing the engines under a dome containing the driving controls and additional seating. The rear area of the resulting "Power Dome Cars" was similar to one-half of the normal passenger cars.

In May 1966 Canadian National Railways ordered five TurboTrains of seven cars each for the Montreal-Toronto service. They originally planned to operate these trains in tandem, utilizing the clamshell doors on the front of the power cars to connect two trains together into a larger fourteen-car arrangement with a total capacity of 644 passengers. While the trains were being built they changed their plans, and in 1971 a rebuild program was put into effect, converting the five seven-car sets to three nine-car sets. The leftover power and passenger cars were sold to Amtrak as two 4-car sets. One of those sets sideswiped a freight train on a test run in 1973 and burned up before delivery. The Canadian trains were built by Montreal Locomotive Works, with their ST-6 engines supplied by UAC's Canadian division (now Pratt & Whitney Canada) in Longueuil, Québec on Montréal southshore. [1]

The three 9-car sets entered service for CN in late 1973. In CN's marketing literature, this train was referred to as the Turbo (although it remained the TurboTrain in CN's own documentation and communication with UAC). CN ran the Turbos on the Quebec City-Windsor Corridor until 1978, when passenger operations were taken over by VIA Rail. The Turbo's final run was on October 31, 1982, when they were replaced by LRC trainsets from Bombardier Transportation, which employed conventional diesel-electric locomotives. According to CN's records, the rebuilt TurboTrains had an availability rate of over 97% for the their careers with CN and VIA.

The TurboTrain also entered service for the Department of Transportation in the USA in 1968. it was operated by Amtrak for routes between Boston to New York. The American TurboTrain was built in a 3-car configuration but this was expanded to 5 cars in 1972. They achieved speeds as high as 100 mph (160 km/h) in regular service.

In terms of records, the three-car TurboTrain was achieved a speed of 170.8 mph (275 km/h) on the DOT's high speed test track on Penn Central's main-line between Trenton and New Brunswick, New Jersey on December 20, 1967. This is still the North American speed record for the fastest production train, despite the attempts of Acela to unseat it. On April 22, 1976, a Canadian record was set at the speed of 140.6 MPH (226 km/h).

In the early 2000s, some of the ideas behind the Turbo reappeared when VIA and Bombardier Transportation proposed upgrading the same routes to use Bombardier’s experimental JetTrain, a new turbine-powered tilting train capable of cruising speeds in the range of 150 mph (240 km/h) and TGV like top speeds of 185 mph (300 km/h), developed in France from the former French Alsthom Turbo-Train. 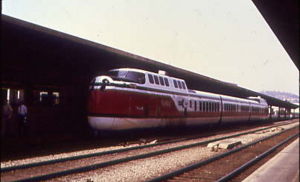 The Turbo visited Los Angeles' Union Passenger Terminal (LAUPT) during its tour of the United States in 1971.