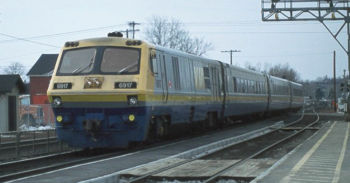 LRC is a bilingual acronym for Light, Rapid, Comfortable or Léger, Rapide, et Confortable, the name of a series of lightweight diesel-powered passenger trains that are currently used on short- to medium-distance inter-city service in the Canadian Provinces of Ontario and Quebec. The LRC family includes both locomotives and passenger carriages designed to work together, though the two can be, and now are, used separately.

The trains were intended to increase the speed of passenger train service over conventional non-high-speed railway tracks. They do this using active-tilt technology to reduce the forces acting on passengers when a train travels at higher speeds around a curve in the railway tracks, and thus increase passenger comfort without the need to build new, straighter tracks as is required for high-speed trains such as France's TGV and Germany's ICE. The LRC is the oldest tilting train still in service.

Initially, the LRCs were plagued with problems. One common problem was that the cars would ‘lock’ in the tilted positioned even after the track had straightened out from a curve. The locomotives were never designed to tilt.

LRCs have reached speeds as high as 208 km/h on test runs, but signalling limitations generally restricted them to more conventional speeds in practical operation. The fastest operating speed today, in the Quebec City-Windsor Corridor is about 160 km/h, making them the fastest trains in Canada. Many sections of the corridor are signed for a special, higher speed when the LRC's tilting system is activated. 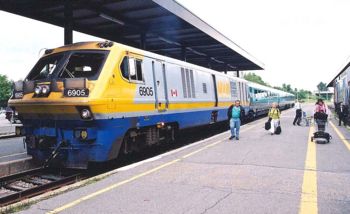 LRC #6905 at Ottawa, Ontario during the initial Nightstar test runs, in the summer of 2000. This was one of the last runs of the LRC locomotives.

LRC trains have been operated by the continent's two major present-day passenger railways, VIA Rail in Canada and Amtrak in the United States. Amtrak returned their leased trains after extensive testing and experimental service between Boston and New York, but VIA Rail put the trains into service, persisting through their initial teething pains and coming to depend on the LRC for the majority of VIA’s intercity service in the Quebec City-Windsor Corridor. The original LRC locomotives were gradually retired after ten to fifteen years of service (although #6905 was used during test runs of the Nightstar ‘Renaissance’ carriages between Glen Robertson and Ottawa in 2000), but most of the carriages remain in service in 2006, though pulled by much newer locomotives.

Bombardier have since used updated versions of the LRC carriages in the Acela Express electric high-speed trains they developed for Amtrak in the late 1990s, and in the experimental JetTrain recently proposed for several corridors in Canada and the United States.