The JetTrain is an experimental high-speed passenger train built by Bombardier Transportation in an attempt to make European-style high-speed service more financially appealing to passenger railways in North America. It uses the same LRC-derived tilting carriages as the Acela Express trains that Bombardier sold to Amtrak in the 1990s and a similar locomotive, but instead of being powered by an overhead catenary as is the Acela and most other high-speed trains, it uses a 3,750 kW (5,000 shp) Pratt & Whitney Canada PW150 gas turbine.

Like the Acela trains, it is capable of speeds in the range of 240 km/h (150 mph) depending on tracks and signaling. It has recently set a world record by running a sustained speed of 330 km/h (205 mph) showing its ability for real high-speed performances.

In the early 2000s, Bombardier aggressively marketed the JetTrain to a number of customers in North America as a less-expensive way to build high-speed railways, but no such systems have yet been constructed, and the company appears to have stopped focusing on this campaign, although they have constructed the fastest fossil-fuel train in the world. 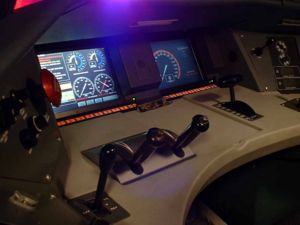 Controls of the Jet Train.

The system that came the closest to being built was Florida Overland Express for passenger service between Orlando and Tampa in the United States, which was to open in 2009, but was denied funding by a referendum in 2004, after the start of detail engineering stages.

In Canada, Bombardier and VIA Rail presented a proposal to use the JetTrain on VIA’s busy Quebec City-Windsor Corridor, but were unable to obtain funding from the national government; some analysts believe it was the victim of the transition period during which Paul Martin was replacing Jean Chrétien as prime minister.

In the UK, the Jet Train has been proposed as a replacement for the 125mph diesel-electric HST. [1]