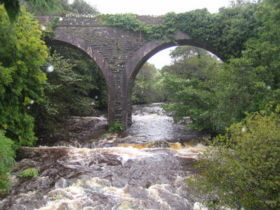 The Tralee and Dingle Light Railway and Tramway was a 31.65 mile (51 km) 3 ft (914 mm) gauge narrow gauge railway running between Tralee and Dingle, with a 6 mile (10 km) branch from Castlegregory Junction to Castlegregory, in County Kerry on the west coast of Ireland. It operated between 1891 and 1953, the Castlegregory branch closed at the outbreak of the Second World War. It was the most westerly railway line in Europe. A 3 km section has now been reopened as a preserved line[1] between the Aquadome in Tralee and Blennerville Windmill.