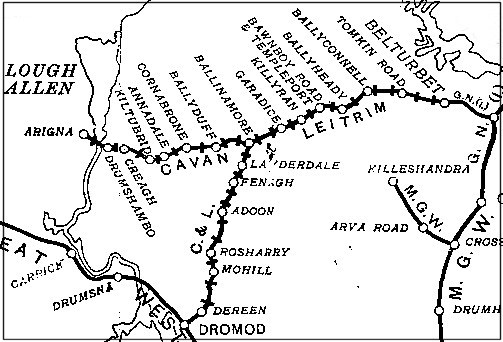 The Cavan & Leitrim Railway was a narrow gauge railway in the northwest of Ireland. Unusually for Ireland this 3ft gauge line survived on coal traffic. It ran from 1887 until 1959 and outlived most of the other Irish narrow gauge lines, giving a further lease of life to some of their redundant engines.

The line connected Cavan and Leitrim. It comprised of a main line 34 miles long between Dromod and Belturbet with a 15 mile branch from Ballinamore to Arigna. Passenger traffic was minimal except on fair days. During the First World War a 4 mile extension from Arigna to Aughabehy was built and opened on 2 June 1920.

A short section of line was re-opened in 1994 at Dromod station. The line is currently half a mile long, though it is intended to extend to Mohill in the future.