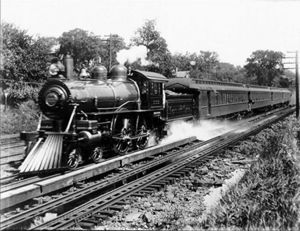 A track pan (American terminology) or water trough (British terminology) is a long trough filled with water, lying along a stretch of railroad/railway track between the rails.

Steam locomotives use large amounts of fuel but even greater amounts of water. While condensing equipment can be used in stationary and naval propulsion applications, the bulk and complexity of these renders them impractical for locomotive use. Thus, there is no recycling of water in the average steam locomotive, and it must be constantly replenished from an onboard supply.

As trains and locomotives grew ever larger, the thirst of locomotives began to be a problem. Railroads began to desire the ability to run non-stop for very long distances, and locomotive tenders grew enormous, up to a weight of half a million pounds (225 tonnes) fully laden. Even then, many stops would have to be made on a run such as New York to Chicago. As competition increased, these delays became increasingly undesirable. Tenders could have grown still further, of course, but hauling a dead weight of water the entire length of the journey would hugely cut into revenue-earning capacity.

The obvious step is to take on supplies on the move. Fuelling on the move would be almost impossible but water poses fewer problems as spillages are not normally a problem. Eventually John Ramsbottom, a Victorian engineer, devised the water trough/track pan. This is a very long (several hundred yards) shallow trough laid in between the rails at a suitable point on the line where tender replenishment is required and the trough can easily be filled from a nearby water source. Naturally, soft water sources were preferred as they caused less scaling in the locomotive's boiler. One example was at Oakley in Bedfordshire, where the troughs are long gone, but the sides of the cutting are still faced with brick to resist the overspray from a train taking on water.

A scoop is fitted to the underside of the locomotive's tender in such a way as it can be raised or lowered, normally remotely (often by a screw mechanism or compressed air). The scoop feeds into a vertical pipe that has an outlet at the top of the tender's water tank. When the scoop is lowered at speed into a water-filled track pan, water is forced up the pipe and into the water tank.

While a train might have to slow down to pick up water in this fashion (too high a speed would result in water being forced too hard up into the tender, blowing the top or sides off), slowing down to 40 mph or so is less painful than having to stop and fill up. The New York Central's famous Niagara locomotives had tenders fitted with special overflow pipes and vents to allow them to safely pick up water at 80 mph.

Filling up from a track pan was certainly a messy affair, resulting in a huge spray of water in all directions. It would certainly be advised not to have a window open in the first few cars after the locomotive—fortunately in the US, those cars were normally for baggage or mail. In one incident on the LMS railway in Britain, two streamlined trains with "Coronation" class locomotives happened to pass each other at a water trough when one of the trains was taking on water. The other train suffered broken windows due to lumps of tender coal scattered by the spray and the complaints from drenched passengers caused the management to retimetable the trains to ensure this could not happen again.

Track pans normally took a while to fill up after being used, so they could not be used immediately by a close-following train. They were also expensive to maintain, generally requiring a pumping station, a lot of plumbing, and an employee or two to maintain. They were thus only justified on a railroad with a high traffic volume. In the United States, several big eastern railroads used them, primarily the New York Central and Pennsylvania Railroad. In England, they could be found on all main lines, except on the Southern Railway (which was largely electrified).

It was easy to distinguish an American locomotive owned by a road that favored the track pan—the tender would have a huge coal capacity but a relatively tiny water tank. This was especially notable on the New York Central's later locomotives. On British locomotives, a large dome is often visible towards the back of the tender - this is the "deflector" which sits over the top of the scoop pipe, and bounces water back down into the tank.