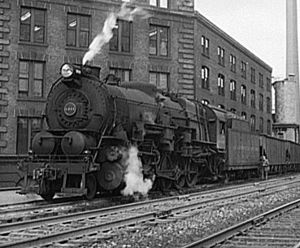 PRR I1s prepares to leave the docks at Cleveland, Ohio with a trainload of iron ore in May, 1943.

The Pennsylvania Railroad's class I1s steam locomotives were the largest class of 2-10-0 "Decapods" built in the United States, with 598 built 1916–1923 (Altoona: 123, Baldwin: 475). These locomotives were the premier freight locomotive type on the system until World War II, and they remained in service until the end of PRR steam in 1957. Nicknames for the type included Decs and Hippos, the latter due to the large boiler. Unlike smaller 2-10-0s that preceded them, the I1s design was huge, taking advantage of the PRR's heavy trackage and high allowed axle load, with a wide, free-steaming boiler. Giant cylinders enabled the I1s to put down that power to the rails, and giant tenders allowed such hungry and thirsty beasts to work hard and long between stops. Their power and sheer brute force was undeniable, but they were not popular with the crews, for they were hard riding at all but low speeds. Indeed, one author described them as the holy terror of the PRR.

Subclass I1sa increased maximum steam cut-off to admit steam for 78% of the piston stroke, rather than the standard 50%. This boosted low speed tractive effort from 90,000 to 96,000 lbf (400 to 427 kN). There was no obvious external difference except for a revised builders' plate. I1s locomotives were converted to I1sa during major overhaul. 489 were converted, while 109 remained as built.