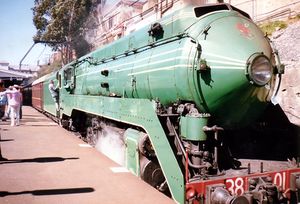 Class leader 3801 - a streamlined example of the class

The 38 class was the most popular type of steam locomotive built and operated by the New South Wales Government Railways in Australia. Built from 1945, the 30 locomotives in the class were designed to haul express trains and replace the 36 class on these premium workings. They were the first NSW locomotives to use the popular Pacific 4-6-2 wheel arrangement.

The 38 class were first conceived in 1938. They suffered many delays during construction - mostly due to the Second World War. 3801 was the first engine completed and entered service in January 1943. The last in the class, 3830 entered service in November 1949. The first five locomotives were built in the Clyde Railway Workshops and wore distinctive streamlined boiler casing. The remaining 25 locomotives were built at the New South Wales Government Railway Workshops at Eveleigh, New South Wales (13 locomotives) and NSWGR Workshops at Cardiff in Newcastle (12 locomotives).

By 1955 diesel locomotives started appearing on the rails of NSW. These gradually took the "glamour workings" away from the 38 class, who would be confined to all-stations passenger and even goods trains. They could still be found working The Newcastle Flyer up until December 1970.

Four 38 class locomotives were saved from scrap. Currently only 3801 and 3830 (the first and last locomotives in the class) are operational (3801 by 3801 Limited and 3830 by the Powerhouse Museum), while 3820 is maintained as a static exhibit at the New South Wales Rail Transport Museum in Thirlmere, NSW. 3813 suffered at the hands of a new railway commissioner after a complete restoration was begun in the mid 1970s. It is now in a stripped condition at the Dorrigo Steam Railway and Museum