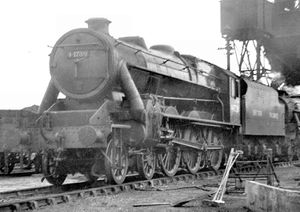 44739 at Crewe North in the year of its construction, 1948, showing the distinctive appearance of a Caprotti black five. 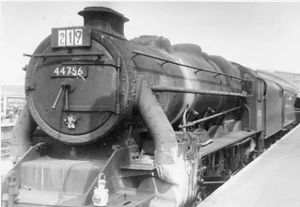 Previous black fives had had Walschaert valve gear as standard. The only previous exception was 1947-built (4)4767 which had Stephenson link motion. (4)4767 and the Caprotti black fives were part of an experimental programme by George Ivatt to try to improve the already good design.

The first of the Caprotti black fives was M4748 which emerged from Crewe in February 1948. It had, in addition to the different valve gear, other modifications which gave it a much different appearance. The boiler was pitched 2 inches higher than previously and the running plate was also lower, necessitating the use of splashers over the wheels. The smokebox was extended and the chimney set further forward. The cab was also a different shape.

In service, the Caprotti black fives were regarded by railwaymen as faster but less powerful that their Walschaert valve-geared classmates.

The two ultimate black fives, 44686-7 were built in 1951 with Caprotti valve gear but with more detail variations. No others were so equipped, though construction with various experimental detail differences continued. Later BR built thirty of the closely-related standard class 5 with Caprotti valve gear, and it was also employed on the standard class 8 71000 Duke of Gloucester.