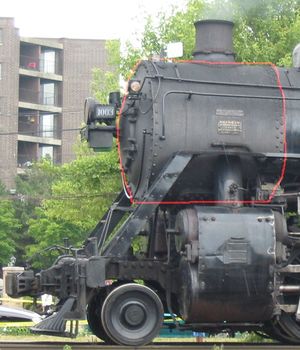 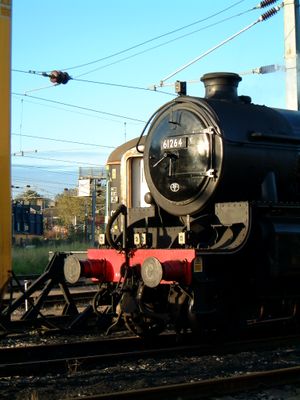 Steam Locomotive 61264 at Norwich Crown Point rail depot. The smokebox can be clearly seen, with the number affixed to the smokebox door. 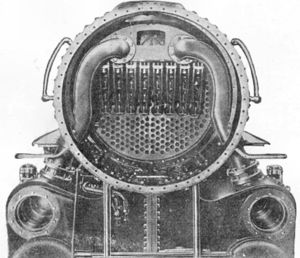 Superheater viewed from the smokebox. Top center is the superheater header, with pipes leading to cylinders. Tubes below feed steam into and out of the superheater elements within the flues.

A smokebox is one of the major basic parts of a steam locomotive. Smoke and hot gases pass from the firebox through tubes where they pass heat to the surrounding water in the boiler. The smoke then enters the smokebox, and is exhausted to the atmosphere through the chimney (or funnel).

To assist the passage of the smoke and hot gases, a blower is often used. This is a pipe ending in a ring containing pin-sized holes, which creates a "ring" of steam jets. The steam forces out the smoke and draws further gases through the tubes. This in turn causes air to be drawn through the grate and firehole, making the fire burn brighter.

When the locomotive is in motion, exhaust steam passes through the blastpipe, which is located within the smokebox. The steam is ejected through the chimney, again drawing the fire. The blastpipe is what produces the characteristic "chuff" sound.

Ashes and soot which may be present in the smoke are often deposited in the smokebox. The front of the smokebox has a door which is opened to remove these deposits at the end of each locomotive's working day. The handles must be tightened fully to prevent air leaks, and when closed, can somewhat resemble the hands of a clock.

The classic layout of a steam locomotive has the smokebox and chimney at the front of the locomotive, referred to as travelling "smokebox-first". Some designs reversed the layout to avoid problems (asphyxiation and poor visibility) caused by having the exhaust blowing back onto the crew, these were called cab forward locomotives.

On many steamrollers an extension to the body of the smokebox also houses the bearing which supports the front roller. Due to limitations of space, these rollers usually have a drop-down flap instead of a circular smokebox door.

Locomotives fitted with a superheater will usually have a superheater header in the smokebox. Steam enters the header as "wet" (saturated) steam, and then passes through a superheater element. This takes the form of a pipe which runs twice through an enlarged smoke tube in the boiler. The steam enters a separate chamber in the header, this time as superheated or dry steam. The advantage of superheating is that the steam has greater expansive properties when entering the cylinders, so more power can be gained from a smaller amount of water and fuel.