An InterCity 125 train (often referred to as High Speed Train or HST) is a formation of two Class 43 power cars with a rake of Mark 3 carriages in between. Its name comes from the fact it can travel at 125 miles per hour, and travels between (inter) cities within the United Kingdom. A BR Intercity 125 promotion Video showing the HST's under construction

An HST is a fixed-formation 125mph (200kph) diesel train usually made up of 7-9 Mk 3 carriages with a British Rail Class 43 power car at each end. This 'top-and-tail' arrangement removes the need for the locomotive to run round its train.

The concept of the HST (or High Speed Train) dates from the late 1960s. British Rail's research division in Derby decided to pursue a parallel approach to future express trains. To complement the advanced technology tilting train project British Rail APT-E it was decided in 1970 to build two lightweight 125 mph capable Bo-Bo locomotives to push-pull a rake of the new 23-metre long Mk 3 coaches. They were intended as a stop-gap until the APT was proven. These specialised locomotives had conventional buffers at the driving end only, and an auxiliary cab at the other end to allow shunting.

Experience with the high-speed British Rail Class 55 Deltic locomotives had shown that a low axle-weight was essential to avoid damage to the track at sustained high speed and that high-speed diesel engines were the only way to provide a good enough power/weight ratio. To power the HST at up to 125 mph, each locomotive had a new diesel engine, the 12-cylinder Paxman Valenta, running at 1,500 rpm and developing 2,250 bhp. The 70-tonne total weight of the locomotive gave it a 17.5-tonne axle loading.

The prototype train of seven coaches and two locomotives was completed in August 1972. By the autumn it was running trials on the main line and in May 1973 the prototype, now classified Class 252, set a world speed record of 143.2 mph. The concept was proved during trial running between 1973 and 1976 and British Rail decided to build 27 production HSTs to transform Inter City services between London Paddington, Bristol and South Wales. The first production power car (numbered 43002) was delivered in late 1975, of significantly different appearance from the prototype. The streamlined front end lacked conventional buffers and the drawgear was hidden under a cowling. The single cab window was much larger than the prototype and there was no driving position at the inner end.

Deliveries continued through 1976 and in October a partial service of HSTs running at 125 mph began on the Western Region. A radical update of the standard BR livery was complemented by the 'InterCity 125' branding, which also appeared on timetables and promotional literature. By the start of the summer timetable in May 1977 the full complement of 27 class 253 sets (253001 - 253027) was in service on the WR, completely replacing locomotive-hauled trains on the Bristol and South Wales routes. Usage of the trains rapidly increased due to the speed and frequency of the service, an effect previously only seen when electric trains had replaced slower diesel or steam services. The displacement by HSTs of the British Rail Class 50 locomotives to slower services effectively finished off the last 'Western' diesel hydraulics British Rail Class 52 by early 1977.

The production of Class 254 (eight-car trains) continued through 1977 for East Coast Main Line services. Initially British Rail planned to fit uprated 2,500 bhp Valentas to these longer HSTs but this plan was shelved as the intensive running on the WR began to result in a high level of engine failures, often due to inadequate cooling. For a while the WR power cars were derated to 2000 bhp. The class 254s began to work important ECML expresses such as the Flying Scotsman from the summer timetable in May 1978. Within a year they had displaced the Deltics to lesser workings and reduced the journey time to Edinburgh by up to an hour.

In the early 1980s, the HST had truly caught the travelling public's imagination, thanks in part to a memorable television advertising campaign fronted by Jimmy Savile, together with the advertising strap-line "This Is The Age Of The Train". BR enjoyed a boom in patronage on the routes operated by the HSTs, and InterCity's profits jumped accordingly - with cross-subsidisation in turn safeguarding the future of rural routes that had been under threat of closure since the Beeching Axe of the 1960s.

Production of HSTs continued until 1982, allowing them to take over services from London to the West Country, many Cross-Country express trains and finally the Midland Main Line (MML). In total 95 HST sets and 197 Class 43 powercars were built between 1976 and 1982.

More Mk 3 trailer cars were built in the 1980s for the WR class 253s, making them eight-car rakes in common with those used on ECML & MML services. During the 1990s only the Cross-Country sets remained as seven-car rakes, with just one First Class carriage. 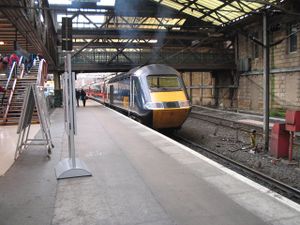 In 2004 HSTs are used by First Great Western (84 power cars), Midland Mainline (63 power cars) and GNER (23 power cars). From 1997 to 2003, HSTs were used by Virgin Trains until they were replaced by Voyager and Super Voyager DMUs. In 2004 Midland Mainline reduced its HST fleet in favour of Meridian DMUs. Network Rail uses an adapted HST for its New Measurement Train.

The First Great Western HSTs have 472 passenger seats and storage for six bicycles.

The design was used as the basis for the Australian XPT, which uses different coaching stock and has a top speed of 100 mph (160 km/h).

In 2006 it was announced that Grand Central, a new open-access operator on the ECML, would use HST sets on its new service between London and Sunderland. 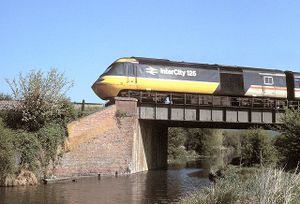 The original Inter-City 125 livery was blue and grey, with a yellow front (for visibility) continuing down the side of the power cars. This led to the nickname 'flying banana'.

The second livery was mostly grey power cars with a white band along the middle, yellow underneath the white band, and with the InterCity colours (cream, red, white, brown) for the parcel compartment of the power cars and the coaches.

There was brownish-grey, dark grey (almost black) around the windows with a red and white stripe below the windows, and retaining the yellow bands on the power cars. A later variant of this livery saw the yellow side-bands replaced with light grey and did not feature the British Rail name or logo: it carried a new INTERCITY logo, with the name in serif type and an image of a swift (unofficially known as 'Roderick').

After the privatisation of British Rail, individual train operating companies painted the HSTs in their own colour schemes, with some lasting longer than others.

The current schemes are

In 2005 Cotswold Rail bought a surplus HST set for spot hire and charters, being repainted into their silver livery with one power car was in Hornby advertising livery. Both power cars were purchased by First Great Western in 2006.

There are several Mk 3 vehicles in the Royal Train. These vehicles came from the prototype class 252 vehicles, identifiable by different window frames. The Royal Train is painted in a deep maroon livery.

In 2004 First Great Western announced a major overhaul upgrade for its Class 43 locomotives (125 power cars), including a new MTU engine. Two power cars are currently undergoing trials in service with the new engine. In 2005, they undertook a trial refurbishment of a pair of HST coaches to bring them up to modern standards. Another coach has been refurbished with experimental aircraft-style seat-back screens. As part of its francise commitments First Great Western has announced that it will be refurbishing its entire fleet and re-engining all Powercars with the MTU engine [1]

In January 2006 the first batch of power cars was taken to Brush Traction to have MTU engines fitted.

Twenty-six of First Great Western's HST fleet are to be refurbished into a high density layout of mostly airline seats for services in the M4 corridor to Bristol and Cardiff, to improve acceleration the buffet cars will be removed. The remainder will be refurbished with new seating (leather in First Class), at-seat power points and will retain the buffet for the long distance services to Swansea and the Westcountry. However, the reduction of the number of coaches has led to chronic overcrowding on the Great Western route.

In January 2007, the first of GNER's 13 refurbished HST's was unveiled. The coaches have been rebuilt to the same "Mallard" standard as its InterCity 225 electric sets with similar designs of seating, lighting, carpets and buffet cars. The power cars themselves have also been upgraded with MTU engines. The first of the HST Mallards should be in service by Spring 2007.

The first replacement of HSTs occurred from 1988 on the East Coast Main Line, with their partly replaced by the InterCity 225 as the line to Edinburgh was electrified. Some retained for services to Aberdeen, Inverness and Hull.

In more recent times, HSTs have been replaced (or augmented) by DMUs such as Class 180 Adelante, Class 220 Voyager, Class 221 Super Voyager and Class 222 Meridians.

These new DMUs have better acceleration than the HST due to a higher power/weight ratio, typically 30% more. However it is widely accepted that such vehicles cannot approach the high level of comfort and noise reduction afforded by the Mk 3 coaches of the HST. The sound and effect of an underfloor diesel engine is now widely recognised as being unsuitable for Inter-City trains. In 2005 the concept of HST2 was mooted by the Government and the rail industry as a like-for-like replacement for the HST fleet. It is uncertain whether this concept will be developed and existing HST operators such as GNER and First Great Western decided in 2006 to refurbish their HST fleets. Brush Traction is to fit modern quiet and fuel-efficient MTU4000 engines to the power cars. It is anticipated that this will give the HST at least another 10 years in front-line service. First Great Western has purchased 14 off-lease ex Virgin power cars and intends to replace the modern Adelante units with 1980s-vintage HSTs.

A vision of the future? Hitachi tests a hybrid HST on the Great Central Railway