The Galena and Chicago Union Railroad (G&CU) was a railroad running west from Chicago to Clinton, Iowa and Freeport, Illinois, never reaching Galena, Illinois. Incorporated in 1836, the G&CU became the first railroad built to Chicago. 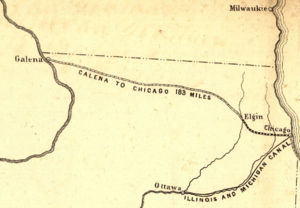 Original plan from Chicago to Galena

The first railroad constructed out of Chicago, the Galena and Chicago Union, was chartered January 16, 1836, to connect Chicago with the lead mines at Galena. "The Pioneer," the first locomotive on the road, arrived at Chicago on October 10, 1848, nearly thirteen years after the charter was granted. In 1850 the Galena and Chicago Union Railroad was completed as far as Elgin. The railroad and the canal were vital in the development of Chicago and the population of the city tripled in the six years after the opening of the canal. Eventually other railroads were built and Chicago became the largest railroad center in the world.

The railroad was constructed starting in March 1848 and was completed in 1853. The first westbound train out of Chicago departed on October 25, 1848, pulled by a used Baldwin-built locomotive named Pioneer.[1][2] In 1862 it leased in perpetuity the Cedar Rapids and Missouri Railroad which was to be the first railroad to reach Council Bluffs, Iowa and the First Transcontinental Railroad. The G&CU consolidated with the Chicago and North Western Railway in 1864.