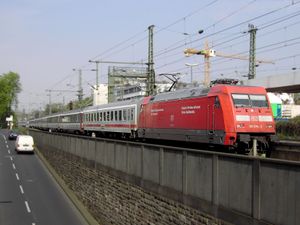 During the pre-Schengen era, passport checks were conducted on EC trains while in motion, rather than while parked at a station or requiring the passengers to disembark, as was sometimes the case for non EC trains. A few require pre-reservation (though this is possible and recommended for all other trains) and in some countries a supplemental charge.

Many of the EuroCity trains carry names continuing the practise started for the luxury trains of the 19th and early 20th centuries. Many of these names are the same that were carried by the earlier TEE trains that followed the same route, for example "Lutetia" for Paris to Milano. The names are printed on brochures showing the times of arrival at various stops and details of the journey, which are laced on the seats.

(including a number of European trains with prefix EC, as of January 14 2007):

EuroCity is also a name used by the twin towns of Tornio and Haparanda, located by the Finland-Sweden border.