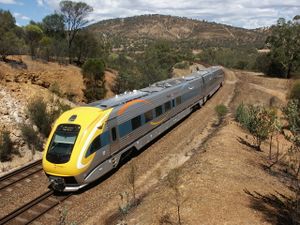 The Transwa Prospector DEMU capable of up to 200 km/h provides a passenger service between Perth, Western Australia and the mining town of Kalgoorlie

A Diesel Multiple Unit or DMU is a multiple unit train consisting of multiple carriages powered by one or more on-board diesel engines. They may also be referred to as a railcar or railmotor depending on country.

The diesel engine may be located above the frame in an engine bay or under the floor. Driving controls can be provided at each end of the car, at one end only, or totally omitted, giving pure 'trailer' cars that still have motors which rely on cab cars for control.

DMUs are usually classified by the method of transmitting motive power to their wheels.

In a Diesel Mechanical Multiple Unit the rotating energy of the engine is transmitted via a gearbox and driveshaft directly to the wheels of the train, much like a car. The transmissions can be shifted manually by the driver, but in most applications gears are changed automatically.

In a Diesel Hydraulic Multiple Unit, a hydraulic torque converter, a type of fluid coupling, acts as the transmission medium for the motive power of the diesel engine to turn the wheels. Some units feature a hybrid mix of hydraulic and mechanical transmissions, usually reverting the latter at higher operating speeds as this decreases engine RPM and noise.

In a Diesel Electric Multiple Unit (DEMU) a diesel engine drives an electrical generator which produces electrical energy. This current is then fed to electric traction motors on the wheels or bogies in the same way as a conventional diesel electric locomotive.

Direct-drive diesel locomotives often require an impractical number of gears to keep the engine within its powerband; coupling the diesel to a generator eliminates this problem. Power still needs to be transmitted to the generator or alternator via a simple gearbox but this is advantageous because;

Distribution of the propulsion among the cars also results in a system that is less vulnerable to single-point-of-failure outages. Many classes of DMU are capable of operating with faulty units still in the consist. Because of the self contained nature of diesel engines, there is no need to run overhead electric lines or electrified track, which can result in lower system construction costs.

One of the first Diesel Multiple Units in North America was the Budd Rail Diesel Car (RDC). The RDC was a single passenger car with two diesel engines and two sets of controls. Any number of cars could be connected together and all the propulsion systems controlled from a single operator's station or cab. Introduced in the early 1940s, the cars were used on rural railway lines that did not warrant full passenger trains, or short commuter services.

In the United States of America only heavyweight DMU systems are permitted on freight rail corridors. This is due to the Federal Railway Administration setting higher buff strength requirements than European regulators, effectively prohibited the use of lightweight European-style light-rail DMUs on main line railways.

Several rail operators in the United States use DMUs suitable for mainline use:

Canada generally follows similar buff strength requirements to the USA, but new services are evaluated on a case-by-case basis. As a result several types of lightweight DMUs have been used:

DMUs were first introduced to Australia in the early 20th century for use on quiet branchlines that could not justify a locomotive hauled service. Today a range of modern DMUs are extensively used across Australia for both commuter and intercity routes:

The Flying Hamburger of Germany, introduced 1933, established the then-time fastest regular railway connection of the world. Top speed was 160 km/h, the average speed being 124 km/h on the tracks between Berlin and Hamburg.

The Trans Europ Express travelled international traffic between countries like Germany, France, Italy, Netherlands in the 1950s and 1960s. They were diesel multiple units since the electrical systems varied a lot.

Also from Germany is the CargoSprinter concept. With two motorized units and three flatbed wagons between them, this DMU container train tried to compete with container road trucks by profiting from existing railway access to factories and businesses, but eliminating the need for inflexible locomotive-pulled cargo trains. The payload was 160 tons. Suffering from technical problems and failing political support for short-haul cargo railway connections, the prototypes were sold to Austria. 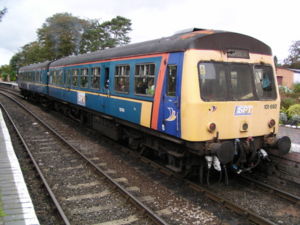 A preserved Class 101, once the most popular DMU on British railways

The first significant use of DMUs in the United Kingdom was by the Great Western Railway, which introduced the small but successful series of diesel-mechanical GWR railcars in 1934. The London, Midland and Scottish Railway also experimented with DMUs in the 1930s, both on its own system (the LMS railcars), and on its Northern Irish subsidiary (the LMS (Northern Counties Committee) railcars), but development was curtailed by World War II.

After nationalisation, British Railways revived the concept in the early 1950s. At that time there was an urgent need to move away from expensive steam traction which led to many experimental designs using diesel propulsion and multiple units. Following the BR's 1955 Modernisation Plan, the building of a large fleet of DMUs was authorised. The BR 'First Generation' DMUs were built between 1956 and 1963, and some remained in service until 2003. Most were diesel-mechanical, but a few designs had diesel-hydraulic transmission (these were generally less successful and were withdrawn earlier than the main diesel-mechanical types).

BR's owners, the British Government, required that contracts for the design and manufacture of new locomotives and rolling stock be split between numerous private firms as well as BR's own workshops, while different BR Regions laid down different specifications. The result was a large number of different types, some of which were built only in small numbers, but in general the First Generation units fell into five distinct groups:

There were also a small number of 4-wheeled railbuses built for the most lightly-used branch lines, but these failed to prevent the closure of such lines, and all of the railbuses had gone by the end of the '60s.

Diesel Electric Multiple Units (DEMUs) were also developed during the 1950s and '60s, for use on the Southern Region. The Southern was largely electrified, but required diesel units for the remaining lines, in some cases as stop-gaps pending planned electrification. Diesel-mechanical and diesel-hydraulic units were judged to have inadequate acceleration, which would cause delays to the more numerous electric trains. Examples included classes 205 and 207, which were nick-named "Thumpers" because of their characteristic sound.

Also in the 1950s, British Railways introduced its Blue Pullman high speed DEMUs. These were few in number and relatively short-lived, but they paved the way for the very successful British Rail "InterCity 125", which were built between 1975 and 1984 and took over most principal express services on non-electrified routes. These 125mph trains run with a streamlined power car at each end and (typically) 7 or 8 intermediate trailer cars. Although originally classified as DEMUs, the trailer cars are very similar to loco-hauled stock, and the power cars were later reclassified as locomotives under Class 43. They remain in widespread use. 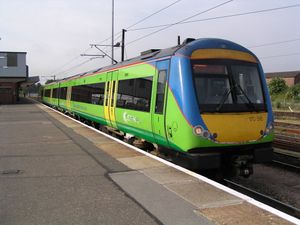 The popular Class 170, the best selling DMU of the last 10 years in the UK.

By the early 1980s, many of the surviving First Generation units were becoming life-expired, which lead to spiralling maintenance costs, poor reliability and a poor public image for the railway. A stopgap solution was to convert some services back to locomotive haulage, as spare locomotives and hauled coaching stock were available, but this also increased operating costs. Commencing in the mid '80s, British Rail embarked upon its so called "Sprinterisation" programme and the older first generation DMUs were replaced by three standardised families:

Following the privatisation of British Rail in the late 90s, several other diesel-hydraulic DMU families have been introduced:

As these modern diesel-hydraulic units have sufficient performance to match the acceleration of Electric Multiple Units, DEMUs are no longer used on the former Southern Region diesel services. However, almost all non-electric InterCity type services are operated by Diesel Electric Multiple Units, and their numbers have been swelled by the introduction of the high speed Class 220 Voyager, 221 Super-Voyager and 222 Meridian/Pioneer units.

In the Republic of Ireland the Córas Iompair Éireann (CIE), which controlled the republic's railways between 1945-86, introduced DMUs in the mid-1950s and they were the first diesel trains on many main lines. The Great Northern Railway, merged into CIE at this time, also brought some DMUs of its own of a similar style. They were not well suited to the long-distance tasks and were replaced in a few years by traditional trains with new diesel locomotives, being then mostly restricted to Dublin commuter lines. The power systems were worn out by the 1970s so they were converted to normal carriages pulled by diesel locomotives on these suburban routes, and DMUs disappeared from CIE. But since 1987, Iarnród Éireann (IE) have been increasing the use of this type of train, in order to replace older locomotives and carriages, using new types of train manufactured in a number of overseas countries.

In Northern Ireland the Northern Ireland Railways used DMUs extensively from the 1950s throughout its system, notably the NIR 80 Class introduced in the early 1970s and currently being replaced (as of 2007).

Korail operates many DMUs. The DHC (Diesel Hydraulic Car), which made its debut for the 1988 Seoul Olympics, can reach speeds up to 150 km/h and serves Saemaul-ho trains. The NDC (New Diesel Car) serves Mugunghwa-ho trains and the CDC (Commute Diesel Car) serves Tonggeun trains. The NDC and CDC can reach speeds up to 100 km/h and are not used for mountainous lines such as the Taebaek Line.

The development of DMUs in Japan started in 1950s following the improvement of fuel supply that was critical during World War II. In 1953, the Japanese National Railways put the hydraulic torque converter into practical use. This invention facilitated the development of DMUs, which spread all over the nation as not only on local services but also on long distance express services. In 1960, the 9-car KiHa 80 series DMUs debuted on Hatsukari limited express service connecting Tokyo and Aomori (about 750 km).

Presently, all the passenger railway companies of Japan Railways Group (JR Group) operate DMUs on semi-trunk and local lines while almost all of trunk lines have been electrified. On the JR lines not yet electrified, locomotive trains were abandoned but only small number of sleeper trains. There are also a number of independent railway lines that operate DMUs.