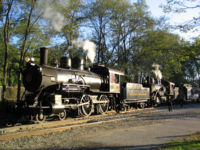 The Wilmington and Western Railroad is a tourist railroad located very near the city of Wilmington, Delaware with its depot off Route 41 (next to Route 141) and Kirkwood Highway (Route 2).

The line has both steam and diesel locomotives in operation. They pull a wide variety of excursion trains up and down the 10.2 mile mainline.

The Wilmington and Western Railroad was chartered in 1867 to move goods between the mills along the Red Clay Creek and the Port of Wilmington, and officially opened for freight and passenger service on October 19, 1872. Three passenger trains and a mixed freight train operated six days a week on nearly 20 miles of track between downtown Wilmington, Delaware and Landenberg, Pennsylvania. Much of the line ran through the Red Clay Valley, bustling in the late 19th Century with farms, small villages and water-powered mills. Excessive construction debts and poor management caused the line to fall into foreclosure in 1877, just a few years after opening. New owners reorganized the line as the Delaware Western Railroad, which became highly profitable moving kaolin, vulcanized fiber materials, snuff, iron and coal to and from the mills.

When a resort opened along the railroad in the late 1880s at Brandywine Springs, the passenger business flourished only to be discontinued on September 28, 1930, a victim of the Great Depression. Shortly thereafter, the Pennsylvania Railroad discontinued its connecting service to Landenberg. With trucks and automobiles gaining in popularity, the Landenberg Branch saw a sharp decrease in freight traffic, and the line was shortened to Southwood, Delaware in the early 1940s. After the demolition of the large Broad Run Trestle and growth of residential development after World War II, the line was again shortened to Hockessin, Delaware in the late 1950s.

In the mid 1960s, Historic Red Clay Valley, Incorporated (HRCV) was formed and began leasing the tracks from the B&O on weekends beginning in 1966, operating steam-powered tourist trains between Greenbank Station and Mt. Cuba. In the mid-1970s, the line's new owner, The Chessie System, determined that the line had become a financial burden and filed for abandonment of the Landenberg Branch. With the line due to be demolished, fundraising began by HRCV. In August of 1982, the remaining 10.2 miles of the Landenberg Branch were purchased by Historic Red Clay Valley, Incorporated.

In 1999, the rains of Hurricane Floyd caused considerable damage to the railroad. Two trestles were entirely destroyed by the flooding of Red Clay Creek, which also caused track washouts and damaged several other trestles. The two destroyed bridges were replaced by steel trestles, but the other timber trestles were simply repaired. In 2003, Tropical Storm Henri struck the valley and produced an even more catastrophic flood. While the two steel bridges (and an iron trestle at Ashland) survived the flood, the remaining bridges were swept away or irreparably damaged. Despite the damage caused by these storms, the Wilmington and Western has continued to operate on the remaining track, and is in the process of replacing all of the destroyed bridges with steel trestles. As of November 25 2006, three of the six bridges have been replaced, and the railroad is open from Greenbank to Mt. Cuba Road.

#4662 is waiting for passengers on a crisp fall day.

SW-1 #114- Locomotive No. 114 was built in 1940 by the Electro-Motive Corporation (EMC) of General Motors for the Lehigh Valley Railroad.

SW-1 #8408- Engine 8408 was built in 1940 by the Electro-Motive Corporation (EMC) of General Motors and served the Baltimore and Ohio Railroad in freight service on the Landenberg Branch until 1982.

Doodlebug #4662 aka "The Paul Revere"- Railcar 4662 was built by Pullman Standard for the Pennsylvania Railroad and outshopped on April 29, 1929. 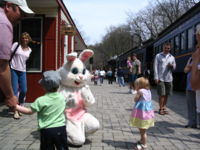 The Wilmington and Western Railroad offers a wide variety of excursions.

Valley Local trains are pulled by either steam or diesel locomotives and make a leisurely trip up the Red Clay Valley.

Once fall comes around one can enjoy a Full Moon Hayride through the Red Clay Valley on an original railroad flatcar converted especially for hayrides. 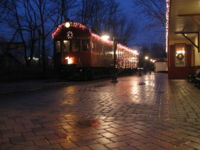 The festive looking #4662 is ready to go on a cold December evening.

Once the steam engine is put away for the winter the doodlebug makes a festive appearance for the Holiday Nights run.

The Railroad also runs two separate dinner trains. The Ride to Dine Dinner Train takes passengers to a local restaurant in style on the doodlebug. The On Board Dinner Train serves a catered meal to passengers as they ride through the Red Clay Valley!

For more information and to find out the dates these trains operate, please look at the railroad's Operating Schedule