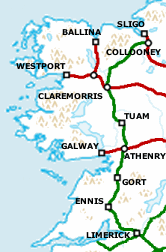 Map of the West of Ireland, showing the Western Rail Corridor and ex-GSWR line south of Limerick in green, other ex-MGWR lines are in red.

The Western Railway Corridor (WRC) in the Republic of Ireland is a recent term for a mostly disused railway line running through the West of Ireland. Currently only two sections from Limerick to Ennis and Collooney to Sligo see regular services, with other sections either closed, or only technically open.

In 2005 an Expert Working Group reported on the prospects for reopening all or part of the corridor. In September 2006 the preservation and reclamation of the northern section was begun and the Government then announced funding to begin Phase 1 of the re-opening of the corridor, beginning with Ennis-Athenry and Athenry-Tuam. The reopening of these sections has been included in the Transport 21 infrastructural plan, and the National Development Plan 2007-2013 "Transforming Ireland - A Better Quality of Life for All".

The Western Rail Corridor encompasses railways built by various companies throughout the late 1800s forming a line from Limerick to Sligo. Towns along the WRC include Ennis, Gort, Athenry, Tuam and Claremorris. The route crosses the Dublin–Galway line at Athenry, the Dublin–Westport/Ballina line at Claremorris, and the Dublin–Sligo line at Collooney. The route largely parallels the corridor served by the N17 and N18 roads. Passenger services between Claremorris and Collooney ended in 1963, with the section being closed completely in 1975 (the track was left in situ but severed at Collooney). Passenger services between Limerick and Claremorris ceased in 1976. In December 2003 a new seven/eight train a day service (seven days a week) started between Limerick and Ennis (connecting or continuing to/from Dublin or Limerick Junction).

Freight services ran regularly on the Limerick to Claremorris section until the mid 1990s. However with the closure of the Asahi factory near Ballina, regular freight services north of Athenry ceased in 1997. Fertiliser trains from Foynes continued to use the line as far as Athenry until 2000 and bulk cement trains from the Irish Cements Ltd Castlemungret factory near Limerick until 2001, when the line ceased to have any regular traffic. In 2002 the section from Athenry to Claremorris was severed at Athenry during re-signalling of the Galway line.

Debate on the need for the Corridor

While all the main political parties and the local authorities of the counties through which it passes have supported the Western Rail Corridor, questions have been raised about its viability. Critics claim that southern sections of the scheme are more viable than those closer to Sligo. Arguments against the reopening centre mostly on the wisdom of providing train services given the dispersed population patterns of the region. As the route from Ennis to Claremorris has now been approved under Transport 21, these arguments apply only to the section between Claremorris and Collooney which has yet to receive funding.

Supporters of the project predict that passenger numbers will be high enough to meet operational costs[1]. Demand for transport along the route is said to be evidenced by traffic on the Sligo-Galway road and by the frequency of bus services. The recent upgrading of the Limerick Ennis line and consequent increase in traffic volumes is said to prove the viability of North-South rail alignments in the West of Ireland.

Opponents of the project counter that any rail line servicing such a "sparsely populated region" (as they put it) will have very few passengers.

The presumed social benefits of restoring this rail service have been presented as an argument in favour of the project. The argument is that even if the line is not profitable, it will provide a vital social service for a poorly served region of the country. Project opponents argue that social benefits will only be gained if the service is popular and return to their predictions of low passenger numbers (see above). Some also argue with the assumption that the West is receiving less than its fair share of government spending.

Lobbyists for the project point to the recommendations of this report commissioned by the minister for transport as evidence that the project is justified. Criticisms of the Report have included the reliance on anecdotal testimony regarding freight demand and the absence of costings for rolling stock and operating expenses.

The effect of freight

This article or section does not cite its references or sources.
Please help improve this article by introducing appropriate citations. (help, get involved!)
This article has been tagged since September 2006.

However, it is increasingly likely that with the introduction of the increased train frequency through Kildare due to higher volumes of passenger services to Cork, Waterford, Limerick, Galway, Midlands and Mayo – combined with the traffic of empty passenger trains to and from the new service depot in Portlaoise – there will no longer be path space for the current or future growth of Timber and Norfolk Line container traffic via Kildare.

The solution may be (as identified by McCann) to open the full Ennis Claremorris Section and divert and grow this Mayo to Waterford freight traffic via the Western Rail Corridor. [1]

Opponents argue that rail freight volumes in the country have dropped near to zero in recent years and that indirect freight routes already exist from most large towns in the region.

Predicted results of the project

Opponents predict that, following the failure of the line to attract significant passenger numbers, future rail projects will have difficulty gaining funding in Ireland.

Advocates of the project argue that key transport infrastructure should be built prior to development and may actually encourage development to take place. Land use and settlement strategies are in place in all of the counties along the route of the WRC as a result of direct initiatives by the County Development Boards and County Councils concerned. In addition the WRC is specified as a key infrastructural objective in the County Development Plans of Clare, Galway, Mayo and Sligo as well as the Regional Planning Guidelines of the West Regional Authority [2].

In spite of this, project opponents argue that the local councils are not following land use policies that would create centres of population density around the railway stations along this route, but instead are continuing to permit isolated rural housing. Further, although most of Ireland's national railways are single-track, they argue that a single-track rail line will never be considered serious infrastructure.

Timeline for the reopening of the corridor

An Expert Working Group, headed by Pat McCann, CEO of Jurys Doyle Hotels, reported to the Minister for Transport regarding the prospects for reopening some or all of the route. The group was set up by Minister Séamus Brennan at the urging of West-on-Track in June 2004 and delivered its report to Minister Martin Cullen in May 2005.

Frank Dawson, Director of Services for Galway County Council and a member of the Western InterCounty Railway Committee (which preceded the founding of West on Track but continues in existence) presented a paper to members of the Oireachtas on 5 October 2005 entitled Gold in the Ox Mountains.[3] This new paper offers some criticisms of the Report as written by Mr. McCann. Mr. Dawson rejects the notion of strict cost-benefit in favour of "balanced regional development", claiming:

McCann conceded that re-opening Claremorris to Sligo would be very difficult to justify except on the grounds of balanced regional development.

On 1 November 2005 the Transport 21 plan was launched committing government expenditure of 34 billion euros between 2006 and 2015 on road, rail and light rail projects. The Western Railway Corridor commitments under this plan are largely those recommended by the McCann Report. These are:

Minister for Transport Martin Cullen also mentioned completing a feasibility into a rail link for Shannon International Airport in his speech at the launch.

Following preliminary works in Winter and Spring of 2005-2006, official clearance work on the northern section of the line (Claremorris to Collooney) began on the 18th September. The work will be carried out by Iarnród Éireann over the next year.The purpose of the works is to re-establish the boundaries, prevent further deterioration of the line section and prevent any development that may otherwise impinge on the proposed detailed works required for the reopening of the line. Specifically, the works include fencing, hedge cutting, renewal of level crossing gates as well as the provision of some essential drainage, removal of ivy and overgrowth from bridges and the provision of mile posts. [3]

Government approval of funding and planning

On 26 September 2006, Minister for Transport Martin Cullen announced Government approval of funding for the reopening of the Ennis–Athenry section of the WRC, as well as the Athenry–Tuam section [4]. Iarnród Éireann is to proceed with detailed planning and design of the project, including consultation with land owners and local authorities, as well as design of bridges and level crossings. The track renewal is expected to begin early next year, with completion in 2008 (for Ennis–Athenry)and an expected 7 trains per day in each direction..

The Ennis to Athenry railway will serve Limerick, Ennis, as well as new stations at Gort, Ardrahan and Craughwell, and Athenry and Galway. In addition, it will expand commuter links to Limerick and Galway. The Limerick to Galway service will also feed into expanded intercity services between Limerick and Dublin and between Galway and Dublin. Both routes are set for hourly services at peak and two hourly off-peak by 2008.

The investment project to be delivered by Iarnród Éireann involves a renewal of 36 miles of track, including all necessary fencing and drainage and the installation of points and crossings at Gort and Ennis. A single 90 metres platform with furniture, shelter, signage, car park, PA, customer information systems, help point and CCTV provision will be provided at Gort, Ardrahan and Craughwell. These stations will also be accessible to the mobility impaired.

Customer Information Systems, PA, help-point and CCTV will be provided at Athenry and Ennis stations. Repair and improvement work will be undertaken on bridges on the route to allow rail services to operate. There will also be modernised signalling systems and improvement to level crossings.