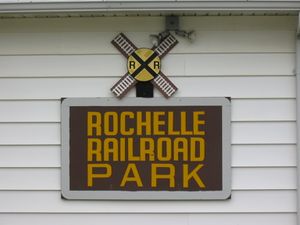 The sign on the gift shop/concession stand at the park. 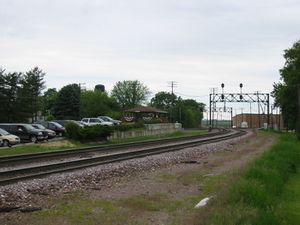 Rochelle Railroad Park as seen from the northeast corner of the park. The tracks in the foreground are those of Union Pacific Railroad; the BNSF Railway tracks pass on the other side of the parking lot and cross the UP tracks between the two visible signal bridges.

Rochelle Railroad Park is a city park maintained by the city of Rochelle, Illinois. The park is located in the southwest corner of the city between two legs of a level crossing between Union Pacific Railroad (UP) and BNSF Railway. Both railroads' mainlines consist of two tracks each connecting facilities in Chicago with points west.