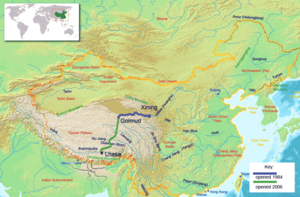 Map of the railway 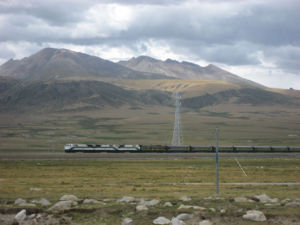 The world's highest railway which traverses the vast terrain of Tibet.

The section of the railway between Golmud and Lhasa was inaugurated on 1 July 2006 by president Hu Jintao: the first two passenger trains were "Qing 1" (Q1) from Golmud to Lhasa, and "Zang 2" (J2) from Lhasa.[1] This railway is the first to connect China proper with the Tibet Autonomous Region, which due to its altitude and terrain is the last province-level entity in the People's Republic of China to have a conventional railway. Testing of the line and equipment had started on May 1 2006.[2] Trains run from Beijing, Chengdu, Chongqing, Xining and Lanzhou.[3]

The line includes the Tanggula Pass, at 5,072 m above sea level the world's highest rail track.

Qingzang railway/Map Forty-five stations are open, 38 are which unstaffed, monitored in the control center in Xining. Thirteen 13 stations are planned. [4] Of the 45 stations, 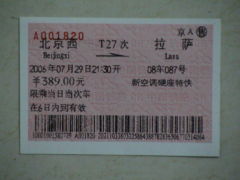 The ticket, no differences from other railway tickets used in China. 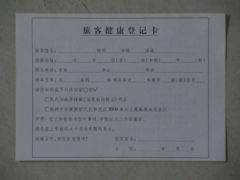 The trains are specially built for high altitude environment. The diesel locomotives used on Golmud-Lhasa section are made by GE in Pennsylvania, and the passenger carriages are Chinese-made 25T carriages: on train T27/T28, between Beijing West and Lhasa, BSP carraiages are from Bombardier. Carriages used on Golmud-Lhasa section are either deep green/yellow or deep red/yellow. Signs used in the carriages are in Tibetan, Simplified Chinese, and English. The operational speed is 120 km/hr, 100 km/hr in sections laid on permafrost.

Apart from hard seat tickets, there is an extra charge for forward-facing seats/berths. Compared with standard pricing for the same class, the soft seat, hard sleeper and soft sleeper tickets will have an added charge of 0.09, 0.10 or 0.16 yuan per kilometre per person respectively.

A Passenger Health Registration Card is required to take the train. The card can be obtained when purchasing the ticket. Passengers must read the health notice for high-altitude travel and sign the agreement on the card to take the train. On August 28 2006 a 75-year-old Hong Kong man was reported to be the first passenger to die on the train, after he had suffered heart problems in Lhasa but insisted on travelling to Xining. [3] On November 19 2006 a woman died giving birth to a child on her own in a toilet.

Tticket prices for 5-carriage trains in the testing period were as follows: (Unit: Chinese Yuan)

Since the formation of the Tibetan Autonomous Region in early 1950s, the Chinese central government has dreamed of building a railway connecting Tibet to the rest of China. Engineers were sent to investigate the possibility, but shortage of technology and money prevented the project from starting.

The 815 km section from Xining, Qinghai to Golmud, Qinghai opened to traffic in 1984. Construction of the remaining 1,142 km section from Golmud to Lhasa, could not be started until the recent economic growth of China. This section was formally started on 29 June 2001. This section was finished on October 12, 2005, and signalling work and track testing took another eight months. It was completed in five years at a cost of $3.68 billion.

Forty-four railway stations are to be built, among them Tanggula Mountain railway station, at 5,068 m the world's highest (Cóndor station, at 4,786 m, on the Rio Mulatos-Potosí line, Bolivia, and La Galera station at 4,781 m in Peru, being the next highest) The Qingzang Railway project involved more than 20,000 workers and over 6,000 pieces of industrial equipment, and is considered one of China's major accomplishments of the 21st century.

The construction of the railway was part of the China Western Development strategy, an attempt to develop the western provinces of China, which are much less developed than eastern China. The railway will be extended to Zhangmu via Shigatse (日喀则) to the west, and Dali via Nyingchi (林芝) to the east. A further extension is planned to link Shigatse with Yadong near the China-India border [8] (Map [9]).

There were and are many technical difficulties for such a railway.

About half of the second section was built on barely permanent permafrost. In the summer, the uppermost layer thaws, and the ground becomes muddy. Chinese engineers dealt with this problem by building elevated tracks with foundations sunk deep into the ground, inserting vertical pipes that circulate liquid nitrogen and cold nitrogen gas into the ground, building hollow concrete pipes beneath the tracks to keep the rail bed frozen, and using metal sun shades.[10] However, global warming may require new methods to be invented in the coming decades to keep this railway operating. 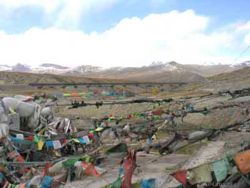 The air in Tibet is much thinner, having 35% to 40% of the oxygen of air at sea level, and therefore special passenger rail cars must be used, and several oxygen factories were built along the railway. At this altitude, ballpoint pens can explode[citation needed] and water in toilets must be heated to prevent freezing. The Chinese government claimed that no construction worker died during the construction due to altitude sickness related diseases. [11] The railway passes the Kunlun Mountains, an earthquake zone. A magnitude 8.1 earthquake struck in 2001. Dozens of earthquake monitors have been installed along the railway.

With limited industrial capacity in Tibet, the Tibetan economy heavily relies on industrial products from more developed parts of China. Transportation of goods in and out of Tibet was mostly through the Qingzang Highway connecting Tibet to the adjacent Qinghai province, which was built in the early 1950s. The length and terrain have limited the capacity of the highway, with less than 1 million tons of goods transported each year. With the construction of the Qingzang railway, the cost of transportion of both passengers and goods should be greatly reduced, allowing for an increase in volume—the cost per tonne-kilometer will be reduced from 0.38 RMB to 0.12 RMB. It is projected that by 2010 2.8 million tons will be carried to and from Tibet will reach , with over 75% carried by the railway[12]. This is expected to boost and transform the Tibetan economy.

The environmental impact of the new railway is an ongoing concern. Certainly the increase in passenger traffic will result in greater tourism and economic activity on the Tibetan Plateau.

Wood is the main fuel source for rural inhabitants in certain regions of Tibet. The damage to the ecosystem caused by cutting trees for fuel takes years to recover due to slow growth caused by Tibet's harsh environment condition. The railway would make coal, which is not produced in Tibet, an affordable replacement. However, the increase in fuel combustion due to increased human activity—in an already thin atmosphere—may affect the long term health of the local population.

Some people worried that railway passengers will throw trash out of train windows. This is unlikely, as all passenger cars will be sealed to enable oxygen enhancement once a train enters Tibet. Trash will be carried back to Golmud by trains to be processed.

The effects of this railway on wild animals such as Tibetan antelope and plants are currently unknown. Along the whole stretch of the railway, 33 overpasses were constructed specifically to allow continued animal migration, here is the Google Maps satellite image of one of such bridges. 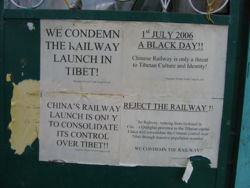 Opposition of Qingzang railway in a Tibetan refugee colony in India.

Opponents of China's Tibet policies claimed that the railway was built to strengthen its political control over Tibet despite doubts over the railway's economic viability, and that more money has been spent on it than on healthcare and education in the Tibet Autonomous Region over the last five decades. [13]

The railway will encourage further immigration from the rest of China, reducing the proportion of Tibetans in the Tibet Autonomous Region. Tibetans find it increasingly difficult to compete in the job market against skilled Han workers (most of the workers on the railway were of the Han ethnicity).[14] Tibetans and activist groups have also expressed concerns that the Chinese government will use the railway to strengthen its military presence in the Tibet Autonomous Region as well as to further exploit Tibet's natural resources and damage its environment. As a result, Bombardier Transportation, a Canadian company, has faced international criticism from some pro-independence organizations for its involvement in constructing rail cars for the project.[15][16][17]

Promotional poster for the new railway at Nagchu