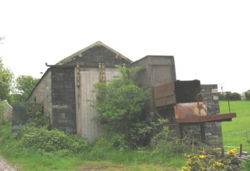 The Padarn Railway locomotive shed at Penscoins in 2005 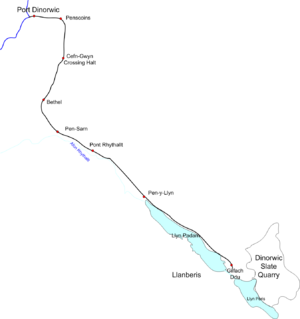 Map of the Padarn Railway

The Padarn Railway was a narrow gauge railway line in Wales, built to the unusual gauge of 4 ft (1219 mm), originally built to carry slate. It was opened in 1824 as a tramway for the Dinorwic Quarry, and converted to a railway in 1843. It closed in 1961. The line ran from Gilfach Ddu near Llanberis to Port Dinorwic.

An unusual feature of the railway were the transporter waggons. These 4 ft. gauge vehicles were flat wagons with two parallel 1 ft 103⁄4 in (578 mm) gauge tracks on them. Loaded slate wagons of 1 ft 103⁄4 in (578 mm) gauge (the gauge used on the extensive internal system at the quarry) were wheeled onto the transporter wagons and carried four at a time down to their destination at Port Dinorwic where they were unloaded via a two foot gauge incline which led to the quayside.

Since closure, part of its route has been reopened as the 2 ft (610 mm) gauge Llanberis Lake Railway.