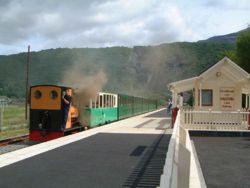 The loco “Dolbadarn” pulls into the Llanberis station which was opened in June 2003.

The Llanberis Lake Railway (Welsh: Rheilffordd Llyn Padarn) is a narrow gauge heritage railway that runs for 2.5 miles along the northern shore of Llyn Padarn in north Wales in the Snowdonia National Park. The starting point is the town of Llanberis at the eastern end of the lake with the western terminus at Pen Llyn in the Padarn Country Park. The return journey takes around 45 minutes. 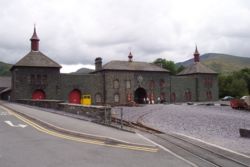 The Welsh Slate Museum, the original terminus of the Llanberis Lake Railway

The railway was built in 1971, specifically for the tourist market. It uses three steam locomotives (“Elidir“, “Dolbadarn” and “Thomas Bach”) all of which ran on the internal 2 ft (610 mm) gauge lines of the Dinorwic slate quarry. There is also a diesel loco “Twll Coed“, which is used when the steam locomotives are unavailable.

The railway runs along part of the trackbed of the defunct Padarn Railway, a 4 ft (1219 mm). gauge line which connected the quarry with Y Felinheli (Port Dinorwic) on the Menai Strait. The Padarn Railway was lifted in 1969 and the lakeside length was replaced by the current Llanberis Lake Railway, originally running from the Welsh Slate Museum at Gilfach Ddu to Pen Llyn. Gilfach Ddu was the main engineering workshop of the Dinorwic Quarry and provided repair facilities for all of the steam locomotives of the quarry system. 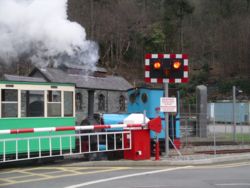 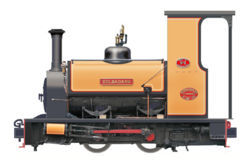 In June 2003 the railway was extended the town of Llanberis, with a new station close to the start of the Snowdon Mountain Railway. The original terminus at Gilfach Ddu is now a through station serving both the Welsh Slate Museum and the nearby Dolbadarn Castle. On the return journey from Pen Llyn, passengers may stop off at the Cei Llydan station for a picnic and a chance to enjoy the magnificent views of the Snowdonian mountains above Llanberis Pass.

Although some railway purists have dismissed the Llanberis Lake Railway as a historically inaccurate creation [citation needed], it gives the chance for people to see the steam engines of the Dinorwic Quarry in a historical setting and co-ordinates well with the Welsh Slate Museum. It is also a popular tourist destination in its own right, providing a pleasant trip through some of Wales' most spectacular mountain scenery.