The National Tramway Museum at Crich, Derbyshire, England, is home to many trams, most of which ran through the streets of cities throughout the United Kingdom and some of which are from other countries. Most of the tram networks, with a few exceptions (mainly Blackpool) closed in the 1960s, although there has been a recent revival with new networks such as the Sheffield Supertram and Manchester Metrolink being built. The museum is based in the Crich Tramway Village, a recreated period village near to the modern village of Crich, near Matlock. The nearest railway station is Whatstandwell railway station on the Derby-Matlock line, a steep uphill walk to the museum. 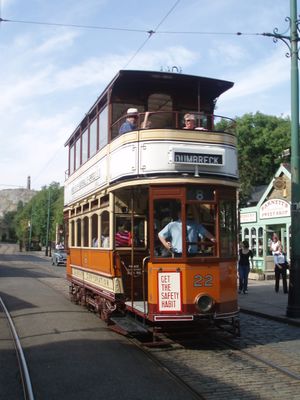 A Glasgow tram arriving at Crich Town End, the terminus for the Trams 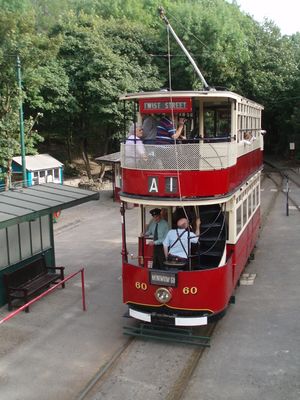 A Johannesburg, South Africa tram at the intermidiate stop of Wakebridge. 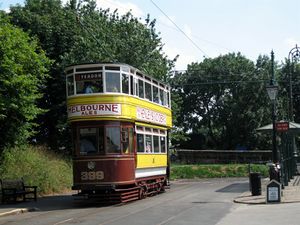 A 1926 Leeds tram at the museum's Terminus southern terminus.

George Stephenson, the great railway pioneer, had a close connection with Crich and today's tramway follows part of the mineral railway he built to link the quarry with Ambergate.

While building the North Midland Railway from Derby to Rotherham and Leeds, Stephenson had fund rich coal seams in the Clay Cross area and he saw a new business opportunity. Crich was already well know for the quality of the limestone, and Stephenson recognised that he could use the local coal and limestone to produce burnt lime for agricultural purposes, and then use the new railway to distribute it. Cliff Quarry, where Crich Tramway Village is now located, was acquired by Stephenson's company and to link the quarry with the limekilns he had built alongside the new North Midland Railway at Ambergate, Stephenson constructed a metre gauge line - apparently the first metre gauge railway in the world. Stephenson was born in Wylam in Northumberland in 1871, but he lived the last 10 years of his life in Chesterfield, often bringing visitors to Crich to see the mineral railway and take refreshment in one of the village inns. He died in 1848 and is buried in Holy Trinity Church in Chesterfield. Stephenson's railway soldiered on for many years.

In the period after the Second World War, when most of the remaining British Tramways were in decline or actually closing, the first event in the history of the National Tramway Museum took place. A group of enthusiasts on a farewell tour of Southampton Tramways in August 1948, decided to purchase one of the open top trams on which they had ridden. For the sum of £10 they purchased number 45 - now the doyenne of the tramcar collection at the Crich Tramway Village. From this act of faith - at the time there were no preserved railways, Museums tended to be dull of glass cases and the idea of amateurs running a tramway or railway seemed incredible - grew the idea of a working museum devoted to operating tramcars. From the original group developed the Tramway Museum Society, established in 1955, incorporated as a company limited by guarantee in 1962, and recognised as an educational charity in 1963. Over the years, the Society has drawn its members from men and women of all age groups and all sectors of the community, working together in different ways to create the tramway museum.

After a sustained search across the country, in 1959 the Society's attention was drawn to the then derelict limestone quarry at Crich in Derbyshire, from which members of the Talyllyn Railway Preservation Society were recovering track from Stephenson's mineral railway for their pioneering preservation project in Wales. After a tour of the quarry, members of the Society agreed to lease - and later purchase - part of the site and buildings. Over the years, by the efforts of the society members, a representative collection of tramcars was brought together and restored, tramway equipment was acquired, a working tramway was constructed and depots and workshops were built. Recognising that tramcars did not operate in limestone quarries, the society agreed in 1967 to create around the tramway the kind of streetscape through which the trams had run and thus the concept of the Crich Tramway Village was born. Members then turned their attention to collecting items of street furniture and even complete buildings, which were then adapted to house the Museum's collections of books, photographs and archives.

The vision of the pioneering members who established the Museum, and the work of members who turned the vision into a reality was recognised formally in 1995, when the Secretary of State for Culture, the Media and Sport announced that the Museum was included in the first 26 Museums which had been designated because of the outstanding nature of their collections.

In recent years the work of the Society Members and the income earned from visitors has been supplemented by much appreciated grants from the Heritage Lottery Fund, the Designation Challenge Fund of the Museums, Libraries and Archives Council and the DEFRA Aggregates Levy Sustainability Fund. The Crich Tramway Village is however still an independent charity, which receives o core funding from the state or local government and it could not function without the ongoing voluntary contribution made by members of the Tramway Museum Society.

A Day at the Museum

On reaching the tramway the Bowes-Lyon Bridge is visible to the left and the Tramway to Glory Mine is on the Right.

It is suggested that waiting at the Tram stop on the right, without crossing over the tracks, and taking the next tram to Stephenson Place is a good start to the day.

On stepping aboard, the conductor in period uniform, will ask you for your old penny, and in return the visitor is presented with two replica tickets - one for the journey, and one to guarantee all day travel.

With a clang of the bell, and a shout of "Hold Tight Please" the tram will pull off, passing under the bridge. On the right the large depots can be seen, and ahead is the period street.

On alighting the tram next to Barnett's Sweet Shop, and the Public Conveniences the village, depots, workshop galleries, gift shop, the Red Lion Pub, and the Derby Assembly Rooms can be visited.

In about 10-15 minutes, the next tram will be ready to depart from Crich Town End Terminus. On busy days, an early arrival is suggested to avoid waiting for the following tram if the tram at the terminus is full. If, however, this does happen, the museum's very own T.A.R.D.I.S can be visited, as well as the Derby Assembly Rooms and the Sweet Shop!

Just before boarding the tram, the conductor can be asked to leave seating space allowing the visitor to watch the trolley pole being turned or the bow collector being flipped. The visitor can also ask the driver for permission to sit or stand in the cab - this is sometimes allowed after reaching the intermediate station of Wakebridge.

With another clang of the bell and another "Hold Tight please!", the tram sets off for Glory Mine. The conductor will come through to issue tickets - presenting the all-day ticket or old penny will suffice. The tram will slow at the Car Park tram stop if someone wishes to board, otherwise it will continue on.

At the start of the single track section, the tram may wait for a while for the tram ahead to clear it and present the driver with the single-line token - if the visitor is in the cab, the driver may allow the visitor to collect the token from the token-pole.

On reaching Wakebridge, the tram will slow and the token will be placed on a new pole. The visitor can alight here, but travelling on to Glory Mine is the recommended route.

With the usual clang and shout, the tram will continue on to Glory Mine, the terminus. Here, the visitors will be asked to turn their seats around, done simply by sliding the seat back to the other side. The visitor may even be asked to flip/turn the bow collector/trolley pole!

The tram now returns to Wakebridge, where alighting is recommended. There are displays and sculptures to see here and the Woodland Walk back to the main terminus, which if it is a fine day is a very pleasing stroll. For those more interested about the actually working of Tramcars, a visit can be made to the Electric Sub-Station, which supplies electricity to the overhead wires. Whilst at Wakebridge you can also visit the Rock Shop and in the Summer "The Kiosk", a refreshments stand.

On returning to Stephenson Place, the main village can again be explored or food and drink can be obtained in either Rita's Tearooms or The Red Lion Pub.

Not all the trams are operational at the moment, but on each operating day the Museum picks three or four trams, usually from the same area, with the exception of the AccessTram, and operates them over its line. The Southampton tram was the very first to be preserved by the Tramway Museum Society, purchased for £10 in 1949. The Berlin tram is a single-deck tram, adapted for the access of people with disabilities. Another (Halle 902) is currently undergoing conversion for the same purpose. The majority of tramcars are double-deck vehicles built between 1900 and 1930, some with open tops. A few trams in the collection were constructed after World War II, including a single-deck prototype from Leeds, which gives an idea of how the UK tram manufacturing industry could have developed given the opportunity.

There are currently 14 trams in an operable condition, available for public use, with 2 being restored/converted, and many more either on display, in store, or available for works use.[1][2]

The museum's overhead wire system has been built so that trams with any type of current collection can be used. The museum currently houses trams with the trolley pole, the bow collector, and a couple even have the modern pantograph.[3]

Other forms used to demonstrate how current can be collected: