The Minneapolis, Northfield and Southern Railway (MN&S) (AAR reporting marks MNS) was an 87 mile (140 km) long American short line railroad connecting Minneapolis and Northfield, Minnesota. It was incorporated in 1918 to take over the trackage of the former Minneapolis, St. Paul, Rochester and Dubuque Electric Traction Company, also known as the "Dan Patch Lines". On 2 June 1982 it was acquired by the Soo Line.

Their mainline ran in what is now the west metro of the Twin Cities. It went from MNS Junction in Crystal, through New Hope, Golden Valley, St Louis Park, Bloomington, Savage, Lakeville and down to Northfield. They had shops at Glenwood on a spur line that went from the present area of Hwy 100 and Hwy 55 to the edge of downtown Minneapolis. There was also a line from Auto Club Junction in Bloomington through Richfield and into south Minneapolis.

Today much of the same track, and even some of the same locomotives and cabooses, are in service as a part of Progressive Rail. 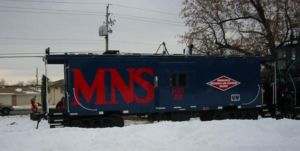 A caboose painted in the former Minneapolis, Northfield and Southern livery. This caboose is now in regular service on the Progressive Rail line in Bloomington, Minnesota.