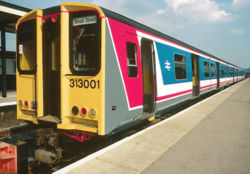 Network SouthEast (NSE) was a sector of British Rail that principally operated commuter trains in the London area and inter-urban services in the densely populated South-East of England.

In the privatisation of British Rail on 1 April 1994 it was broken into a number of franchises.

Before the sectorisation of BR in 1982 the system was split into regions: those operating around London were London Midland Region (Marylebone, Euston, St Pancras and Broad Street), Southern Region (Waterloo, Victoria, Charing Cross, Holborn Viaduct, Cannon Street and London Bridge), Western Region (Paddington) and Eastern Region (King's Cross, Moorgate, Broad Street, Liverpool Street and Fenchurch Street). This was perceived to be a source of inefficiency, so sectorisation reorganised everything into a single organisation covering commuter services. At the same time InterCity took over express services and Regional Railways took over regional services.