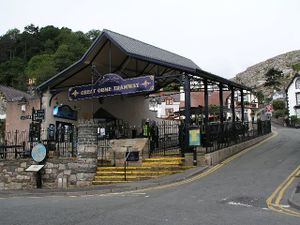 Victoria station at the foot of the line. 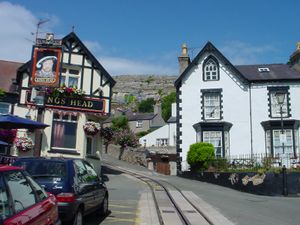 The start of the line, seen from Victoria Station 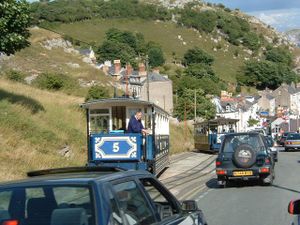 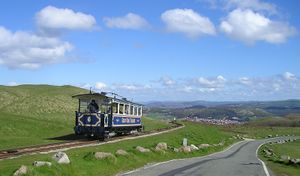 Tram No. 6 nearing the summit of the Great Orme with wonderful views of Llandudno

This is Great Britain's only remaining cable operated street tramway and one of only three surviving in the world. Operation of the tramway differs from the famous and unique San Francisco system in that it is not a cable car but rather a street running funicular, where the cars are permanently fixed to the cable and are stopped and started by stopping and starting the cable.

The tramway was built in 1902 to take passengers to the summit of the Great Orme and is in two sections. The lower section is built on or alongside the public road and has gradients as steep as 1 in 3.8. The upper section is less steep with a maximum gradient of 1 in 10.

The original power house, situated at the Halfway station between the lower and upper sections was equipped with winding gear powered by steam from coke-fired boilers. This was replaced in 1958 by electrically powered winding gear. In 2001, the entire Halfway station, its control room and its power plant were completely rebuilt and re-equipped.

The tramway uses four tramcars, which were new when the tramway was built in 1902. An overhead wire telegraph was formerly used for communication between the tram and the engineer-driver in charge of winding the drum, but this has now been replaced with a modern induction loop radio-control system.

The tramway has three main stations, the lower station, named after the hotel that formerly occupied the station site. The one in the centre aptly named 'Halfway' and the Great Orme Summit station. Passengers must change trams at the Halfway station.